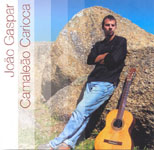 Born with a love of music and a talent for the guitar, Brazilian guitarist and composer Joao Gaspar makes his instrumental debut with Camaleao Carioca, serving notice that there's a new young man on the strings that will not soon be forgetten. Offering original compositions with a variety of flavors, the music includes not only a good measure of the bossa/samba style that one would expect from a Brazilian artist, but a bit of the world influence, a touch of electric fusion, jazz funk and a taste of classical jazz.

Trained in classical and flamenco traditions, Gaspar is proficient on a number of string instruments and is featured here playing electric, dobro and nylon-string acoustic guitars as well as electric sitar, mandolin and banjo. Recorded in 2006 in the guitarist's homeland, the album features a cast of top Brazilian musicians, with special guests including pianists Daniel Jobim (grandson of Antonio Carlos Jobim) and Leandro Braga, acoustic guitarist Guinga and saxophonist Leo Gandelman.

On the only standard here, Guinga's "O Coco Do CoCo," both guitarists play off each other, matching salvos on acoustic guitars. On the world-influenced "Nevoeiro" Gaspar's electric sitar weaves in and out of different melodies with a bit of bossa nova, backed by pianist Jobim.

The music turns interesting on a couple of surprise tracks that demonstrate Gaspar's diversity. Gaspar plays a little fusion with some terrific electric guitar riffs on "Blueseando," a burner that also features trumpeter/flugelhornist Jesse Sadoc's only appearance on the album. The very funky "DDA" follows, with a blistering tenor solo from Gandelman that's matched by Gaspar's own electric guitar joust.

Rounding out the program is "Choro Invisivel," a beautiful ballad with a warm bossa color, romantic slant and delicious harmony, and "Sereno," another light ballad featuring Gaspar solo on the acoustic steel guitar. An impressive first effort by a master of the guitar, Camaleao Carioca delivers on many fronts with excellent musicianship, sophisticated charts and clever arrangements, all resulting in one beautiful package that warrants repeated spins.