By JAMES NICHOLS
April 1, 2001
Sign in to view read count 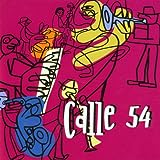 Every once in a while an "exotic" world album garners national attention and sparks the imagination of American pop music fans. Some past examples include Getz/Gilberto, Irakere, the Chieftains, Bob Marley, and most recently Buena Vista Social Club. The CD reviewed below accompanies the documentary touted as the first full-length film dedicated to Latin jazz, Calle 54. Seems that Latin American jazz has exploded back onto the scene reawakening Americans to its infectious rhythms and virtuoso craftsmen. Buena Vista Social Club alerted pop music fans to musicians long since unheard from and in some cases retired in the political exile of Castro’s Cuba. This album kind of picks up on that trend but includes younger and more well-known Cuban artists, some American émigrés, some not. As a compilation of various artists the overall mood of the album is different from the consistency of the Buena Vista Social Club line-up. Instead we get a much more encompassing sampler including Brazilian inspired tracks (Eliane Elias’ Samba Triste), Spanish Flamenco (Chano Dominguez on Oye Como Viene), Nuyorican (Jerry Gonzalez and the Fort Apache Band on Earth Dance), and a mix of salsa, mambo, rumba, and son. The album includes rising stars as well as established sidemen of the Dizzy Gillespie afro-cubano days such as Chico O’Farill and Bebo Valdez. Anyone familiar with Latin jazz would not really consider any of these artists "discoveries." Pop music fans would however.

The album only contains personal picks by Calle 54 Director and long-time Latin Jazz aficionado Fernando Trueba. Lucky for us. His taste proves impeccable. Like Buena Vista Social Club, the soundtrack celebrates the new accessibility of Cuban musicians to American audiences first manifested in the return of Irakere in 1996 after an 18 year exile in Cuba during which two of its members, D’Rivera and Arturo Sandoval, immigrated to America.

Paquito D’Rivera starts the soundtrack with a performance that I can only describe as epic. The name of the tune, Panamerica, sums it up rather perfectly. It includes several different Latin styles and provides a fitting overture to the album. For me, however, the highlight of this album is the beautiful piano solo from Chucho Valdez called "Caridad Amaro." Keith Jarrett, Cecil Taylor, Vince Guaraldi, and McCoy Tyner all bubble to the surface during this performance. These influences however are merely gurgles in the reserve of his unique percussive style. Another highlight is the update of the old Machito vehicle "Afro-Cuban Jazz Suite" by Chico O’Farill. Of course Buddy Rich and Charlie Parker don’t grace this remake, but it’s still a wonderful version if not definitive. The original version of this song can be found on Chico O’Farill’s Cuban Blues on Verve. Other highlights include mambo veterans Cachao and Bebo Valdez contributing the traditional Lagrimas Negras, the brilliant young pianist Michel Camilo on "From Within," and father and son Bebo and Chucho Valdez closing out the set with La Comparasa.

It would be difficult to find a better introduction to modern Latin Jazz, even though this album does not have the same aura of "discovery" that Buena Vista did. However, It is still makes for a very effective introduction to some important musicians particularly for the uninitiated. If already familiar with these musicians, pick up the album for some great cuts. I look forward to seeing the movie.