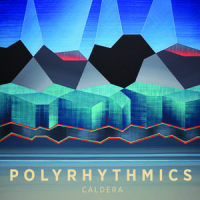 The great  Polyrhythmics of Seattle are back & better than ever in 2017 with their epic album, Caldera. Rich with bold brass and hypnotic percussion, it showcases the instrumental eight-piece's impossibly tight grooves and virtuoso musicianship as they tear through a singular blend of Funk, Soul, psychedelic rock, R&B, progressive Jazz, and Afrobeat.

"Goldie's Road" starts Caldera off with a trippy, Blacksploitation style feeling. They add in spacey synth & guitar effects, plus African percussion noises and muted horns in all the right places. The funky flute riding on top gives the tune a groovy elegance.

"Spider Wolf" is a high-energy percussive jam. Its expressive brassiness helps the percussion power the song along, and the rest of the band creates a stirring blend that makes the body want to move.

"Marshmallow Man" moves the groove into a stimulating Funk eruption. The wah-wah wiggles hips as the horn and rhythm section burst forth for a final explosion of organ and brass jam down.

"Cactus Blossom" blooms sweetly from the edge of Polyrhythmics' Funk volcano. This mellow, soulful Funk song intrigues the listener, and then builds up a dramatic rhythm before letting you back down again.

"Au Jus" is the longest tune on Caldera at more than 9 minutes. It's an impressive ride through everything Polyrhythmics excel at. It's jazzy, funky, soulful, and percussive. Starting off mellow & groovy, it starts to rock out, then finds that groove again. All the players get their chance to root down & get it on this one, as the tune oscillates between heavy & groovy. Then, "Au Jus" turns far-out & spacey.

"Journey to Caldera" is a catchy, funky tune. The horn section finds a lively line and the organ get greasy.

"Compound 49" is an especially funky, joyful groove. The name must signify some magic potion that just makes you feel good when you take it because that's what this tune does. It's definitely one of the best instrumental Funk songs of 2017!

"Dragon Lotion" is a funky, happy, modern Afrobeat groove. The electric piano lines, and then the Latin percussion breakdown make this tune extra diverse and danceable. This song is the most purely Afrobeat sounding tune on Caldera.

"Lord of the Fries" is a little dark, yet still super funky. Its rolling rhythm and potent percussion breakdown make this tune full of surprises, giving the horn section a platform to wail.

"Stargazer" ends the album with downtempo, Afrobeat trance. Overall, Caldera is one of my favorite records of 2017 because of its genre-bending jams, and refusal to conform to easy classification.