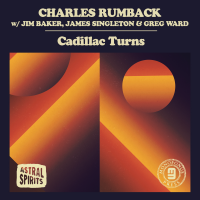 Drummer Charles Rumback has cultivated his melodically-informed sensibility on a number of fine records. His 2017 release, Threes (ears&eyes) is a case in point, with plenty of vigor but softened with just the right amount of sentiment. The album at hand, Cadillac Turns, is much the same, although now in a quartet format with James Singleton on bass and Greg Ward on alto saxophone, and with Jim Baker once again featured on piano.

The five lengthy cuts, recorded live in Chicago at the Instigation Festival, include pieces that Rumback has refined and polished over the years, such as "Salt Lines" and "Too Toney," both of which are found on Threes. One thing that becomes immediately evident with this grouping, however, is that Ward's presence brings out the lyrical aspects of Rumback's writing even more prominently. His lovely rubato opening on "Dragons in Denver" finds the emotional core of the theme before Rumback gets the groove going and the band settles in for a medium-tempo burner that builds in intensity but never quite goes full-tilt. Singleton and Rumback sustain the rhythm adroitly while allowing for a loose feel to emerge. Ward and Baker get plenty of room for solos that range from feisty to pensive. At almost fifteen minutes, it's the ideal vehicle to give all four players a chance to find their collective synergy.

The remainder of the album offers similar shifts of motion and dynamics, with the beauty of the music always at the forefront. "Salt Lines" is centered on another graceful melody, this time in a waltz tempo, and with another scintillating solo from Ward, before a fine arco turn from Singleton in support of Baker's ruminations announces the transition into "Storybook Skyline," with a more complex, shape-shifting groove gradually unfolding. Rumback and Singleton shine here, as their rhythmic agility is impressive, retaining the music's cohesion while allowing a degree of fluidity and indeterminacy. Baker's also at his most energized, with some tenacious playing alongside Ward that adds some percussive power to the cut.

"Convulsive" is ironically misnamed, slowly-paced and deliberate in crafting a mysterious mood with some fine upper-register playing from Ward; and "Too Toney" possesses a steady momentum with another affecting theme, with both Ward and Baker exploring its contours and featuring a lithesome solo from Singleton. And although it's a piece not by Rumback but by Stanley Cowell, "Equipoise" is the ideal finish to the album, illustrating once again the even-keeled harmony of interests that gives the quartet its identity, each player contributing to the whole with contributions that merge seamlessly and sympathetically.

With saxophonist Ward augmenting Rumback's accustomed trio format, Cadillac Turns is one of the drummer's best, and it would be a delight to hear more from this band in the future.