Byther Smith: Blues On The Moon 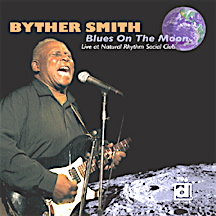 A native of Monticello, Mississippi, guitarist/vocalist Byther Smith has been a venerable Chicago-blues mainstay for decades and has rightly earned the distinction of living legend. Blues On The Moon, part of Delmark Records' exceptional live blues DVD series, was filmed in the summer of 2007 at the Natural Rhythm Social Club, the perfect little hole-in-the-wall for a night of intense, electrified blues.

The opening funk of "Judge of Honor" segues nicely into the lump-a-lump shuffle groove of "If You Love Me," featuring an impressive solo by guitarist Anthony Palmer before Smith cuts loose with his own razor sharp licks. The shuffle grind continues on the crowd-pleasing title track. The tune's hypnotic vamp entices the party crowd to get up off their feet and sway to the groove.

On the rockin' "Hard Times," Smith pays homage to blues great B.B. King with short, vibrato-laden phrasing and a groove reminiscent of King's classic "Why I Sing the Blues." Smith's cutting licks complement his hard-edged vocalizing throughout. His delivery is straightforward and convincing on Sonny Boy Williamson's "Don't Start Me Talkin'" and the autobiographical "Monticello."

The tight stage setup allows for stunning close-ups, capturing the focused interaction between musicians. All in all, Blues On The Moon is an entertaining release with a next-best-thing-to-being-there vibe. Bonus features include commentary by Smith and a detailed discography.

Tracks: Judge of Honor; If You Love Me; Blues On The Moon; Give Up My Life For You; Hard Times; Your Mama's Crazy; If I Misused Someone; Monticello; So Mean To Me; Rock Me Baby; Don't Start Me Talkin'; My Daddy's Mean.