Byron Stripling and the Philly Pops at the Kimmel Center 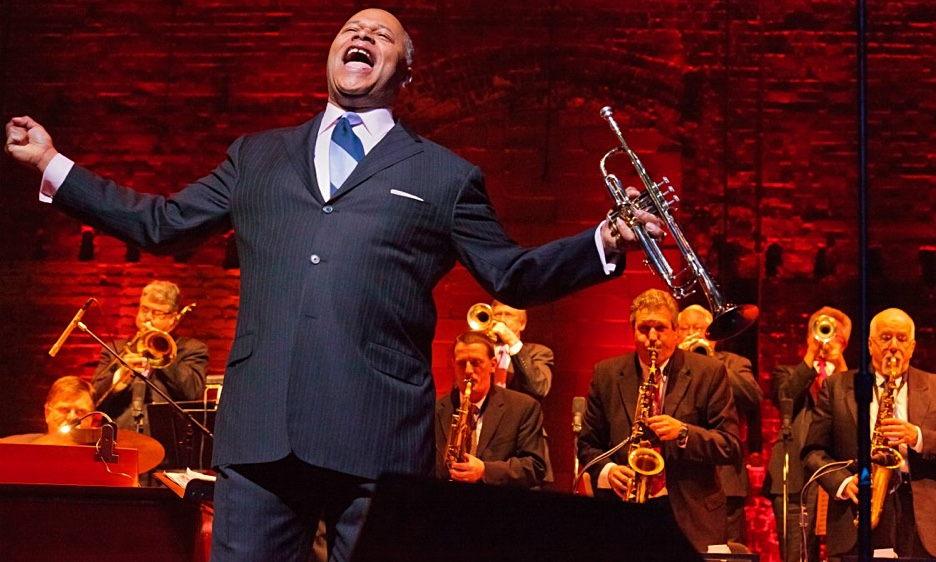 The Philly Pops' "Uptown Nights," as the title implies, revealed itself to be a festive show that featured the music of the 1920s through the 1940s when jazz was the popular music of the Jazz Age, the Swing Era, and World War II. Those were heady times when jazz was a form of entertainment intersecting first with brothels, and then speakeasies, dance halls, and musical theater. Thus, Byron Stripling, billed simply as a trumpeter who played with Count Basie, morphed into a vaudeville actor, singer, and comedian as he and the orchestra swung through fresh arrangements of tunes ranging from "St. James Infirmary" to "I Got Rhythm," "Mood Indigo," and "I Won't Dance," re-creating the showmanship function that fueled the music of those golden eras. The tap dancer Leo Manzari added to the vaudevillian atmosphere, and vocalist Carmen Bradford captured the essence of the singers of that period, especially of her avowed idol, Ella Fitzgerald.

The show was uplifting for this reviewer, who like most of us, came of age during or after the 1950s when jazz became more of a salon art form primarily of small ensembles with only traces of the previous showmanship that lit up the music with demonstrative theatrics. Traces of the latter remained in the antics of Dizzy Gillespie and the dramatic personae of Miles Davis, Dexter Gordon, and others, but this concert -and especially Stripling's performance -gave us an opportunity to experience how the jazz idiom was fashioned to get people up off their seats, laugh, dance, drink, and fight -in other words, have an emotional catharsis. Matters were helped along by the terrific arrangements of Eastman bred Conductor: Jeff Tyzik which combined Ellingtonian elegance, Benny Goodman's swing, and a modern flair. Arrangers like Tyzik should get more acknowledgment for their work, which can make or break a performance. The rich, bright sound of the Philly Pops, including a glorious complement of strings and big band brass, reed, and rhythm sections brought the music to a peak.

The concert got off to a hot start with Duke Ellington's classic "It Don't Mean a Thing if It Ain't Got that Swing." Bradford and Manzari came out for "cameo" appearances, but Stripling stole the show with his singing and humor, making Shakespearean drama of the "Doo wah, doo wah, doo wah, doo wah," prancing around the stage like Falstaff. His sonorous bass baritone voice suggested at various times Paul Robeson, Cab Calloway, Billy Eckstine, and Joe Williams, depending on the context. He turned "St. James Infirmary" into a morbid necrophilic eulogy for a dead prostitute, helped along by Chris Farr's unusual saxophone solo that sounded like someone at the Wailing Wall. "Symphony in Riffs" surprised with an early Benny Carter composition to which the inimitable George Rabbai contributed a stunning trumpet solo. (It's easy to forget that Carter, who contributed so much to modern jazz, was already going strong with Fletcher Henderson in the 1920s.)

Bradford brought the music itself into sharper focus with a well-controlled but forceful rendition of Gershwin's "I Got Rhythm," spiced up with a lively Bird-like saxophone solo by section leader Ron Kerber. Bradford delivered great scatting, honoring her lifelong idol Fitzgerald. Bradford continued to sing with rare disciplined grace and expressiveness with "Our Love is Here to Stay," for which Philadelphia's treasured Rabbai provided a lyrical muted solo.

Two numbers -"Smile Darn Ya Smile" and "You Gotta Give Me Some Rhythm" (a Tyzik original) -gave dancer Manzari an opportunity to show his wares. His body was Astaire-like in its ease, his feet tapped at breakneck speed like Bill Robinson, and his casual attire bore all the signs of a Millennial (LOL!). Stripling engaged him in hilarious banter as the trumpeter tried to give the dancer some lessons in rhythm, falling all over himself in the process.

Following the intermission, a beautifully orchestrated version of "Bugle Call" showed off the Pops sound, and versions of the "St. Louis Blues" and "Mood Indigo" further demonstrated the orchestra's ability to interpret jazz in a way reminiscent of Paul Whiteman's grand ensembles, which like the Pops, included both jazz and classical musicians. "Harlem Street Scene," another Tyzik original, made the rounds of soloists: Kerber, trumpeter Matt Gallagher, and trombonist Dave Cianci all delivering with polished artistry.

Ripling's vocal rendition of Cab Calloway's version of "Minnie the Moocher" was a riot! He not only captured Calloway's unique deep voice, but stretched "hi-dee hi-dee hi-(hi-dee hi-dee ho)" to its farcical limits. What saved Ripling's comedy from gross sarcasm was his gentle soul, expressed in his body language. Throughout the evening, his kindness showed through the mockery, more like, say, Johnny Carson than Don Rickles.

To prevent the comedy from getting out of hand, Bradford, a very serious dedicated singer, more than earned her keep. She began by telling heartwarming and heartbreaking stories of her encounters with Ella Fitzgerald, culminating in her transformative experience of Carmen Lundy inviting her to Fitzgerald's estate sale after her passing to see that Bradford's own CD tribute to Ella was the last thing Fitzerald listened to before she died. Bradford then sung a beautiful rendition of Gershwin's "Someone to Watch Over Me" that brought the house down. Bradford is a rare breed of singer combining superb blues timing with swing (a feature of the Basie Band). And her voice was vibrant and clear, at a level one rarely hears today.

The concert wrapped up with Manzari back on stage with Ripling and Bradford for "I Won't Dance" and "Bill Bailey Won't You Please Come Home." To sum things up, this concert was not only great fun and music. It also afforded an experiential education in the origins of jazz as a kind of multi-media exhibitionism. That's not meant in a sarcastic way. Jazz is the most embodied, ironic, and rhythmic musical story-telling of all time.

Set List: It Don't Mean a Thing if It Ain't Got that Swing; Dinah; St. James Infirmary; Symphony in Riffs; I Got Rhythm; Love is Here to Stay; I Can't Give You Anything but Love; Smile Darn Ya Smile; You Gotta Give Me Some Rhythm; (Intermission); Bugle Call Rag; St. Louis Blues; Mood Indigo; Harlem Street Scene; Minnie the Moocher; The Harlem Numbers Game; I Ain't Got Nothin' But the Blues; Someone to Watch Over Me; I Won't Dance; Bill Bailey Won't You Please Come Home.