By ROBERT GILBERT
February 24, 2003
Sign in to view read count 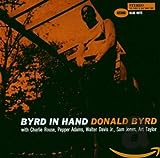 Of the jazz trumpeters who blazed a trail during the 1950s and '60s, Donald Byrd has never really gotten his due. He came into his own at the same time as Miles Davis, Clifford Brown, Chet Baker, Kenny Dorham, etc. were on the scene, unjustly diverting some attention away from Byrd. Yet a listen to a small part of his recorded output reveals a trumpeter with a well-developed penchant for lyricism and who, over time, learned to use space as effectively in his improvisations as Miles himself.

The proceedings kick off in elegant style with a gorgeous rendition of “Witchcraft” that makes expert use of a rhythmic suspension. Byrd’s sensitive rendering of the standard features forceful punctuations by Rouse and Adams that illustrate the orchestral possibilities of a three-man front-line and up the romantic quotient of the tune. Byrd then takes a two-chorus solo, a thoughtful improvisation full of memorable lines.

This nuanced approach continues on the moody “Here Am I” with Byrd again playing in a very subdued, yet impressive, style, aided by a very catchy saxophone vamp. His solo and statement of the theme contrast nicely with Adams’ more forceful thoughts.

The astonishing promise of “Witchcraft” and “Here Am I” does not carry through the rest of Byrd in Hand, though, which has the band stuck firmly in hard-bop territory with less memorable results. However, of pianist Walter Davis Jr.’s two contributions to the album, “Bronze Dance” is particularly good. It boasts a well-composed theme and an improvisational framework that alternates between jazz and Latin rhythms.

The album’s closer, “The Injuns,” is Byrd’s take on the changes of Ray Noble’s “Cherokee.” While some may argue that the tune relies on a stereotypical conception of Native American music, there’s no doubt that what Byrd has come up with works extremely well. Byrd, Rouse, Adams and Davis Jr. all turn in inspired solos, and Byrd in Hand ends with drummer Art Taylor hammering out a throbbing rhythm on his tom-toms.

As part of Blue Note’s Rudy Van Gelder Edition series, Byrd in Hand features state-of-the-art remastering by the legendary engineer. Simply put, the sound is amazing, making the treasures found within Byrd in Hand that much easier to enjoy.