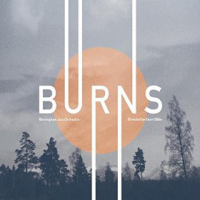 The Birmingham Jazz Orchestra—that's Birmingham, England—formed in the fall of 2014, just a few months before recording Burns, its debut album of tunes written by director/conductor Sean Gibbs. The maturity of the writing and playing, the strength of the sections and the verve of the solos belies the inexperience of the ensemble—this is a strong first outing.

The Burns who's provided the inspiration for these tunes isn't the great Charles Montgomery Burns: it's the arguably even greater Robert Burns, Scots poet, bon vivant, exciseman and folk song collector. The Edinburgh-born Gibbs has taken five of Burns' poems—the ghostly adventures of Tam O'Shanter to the more prosaic problems of the toothache—and composed big band instrumentals that capture their spirit, humor and humanity.

Gibbs' compositions convey the mood of each poem, without attempting to portray the stories too literally. Tam's confrontations with ghosts and witches, and his meeting with the Devil himself, are reflected in the rhythmic shifts and dramatic horn section passages of "Tam O'Shanter": the celebration of fatherhood (and sexual prowess) that is "Nature's Law" comes across in the solos and the swooping horn phrases. The meditation on the ubiquity of death which forms "To A Mountain Daisy" is reflected in the tune's mournful beauty.

"Love In The Guise Of Friendship" is possibly the album's most ambitious tune: the reflective opening and closing passages, with pianist David Ferris and trombone soloist Richard Foote making telling contributions, separated by an upbeat midsection characterized by a Latin groove and Elliot Drew's alto solo. "Address To The Toothache" might just be a bit too upbeat and cheery, however, given Burns' apparent state of extreme discomfort when he wrote the poem.

The one downside to Burns is an occasional problem with sound balance, soloists getting somewhat overwhelmed by the ensemble: most noticeably on "Tam O'Shanter" when Ben Lee's fiery, bluesy playing sounds muffled. That minor issue aside, Burns is a worthy celebration of Burns' work and a superb debut for Gibbs and the Birmingham Jazz Orchestra.

Tam O'Shanter; Love In The Guise Of Friendship; Nature's Law; To A Mountain Daisy; Address To The Toothache.