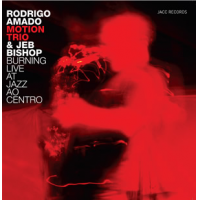 Rodrigo Amado's improvising Motion Trio might be better described as The Confluence Trio or Conflux, because its sound is a meeting of rivers. Like the three rivers of Pittsburgh, where the Monongahela and Allegheny Rivers join to create the Ohio River, or Sangam, India where the Ganges, Yamuna and Saraswati meet, the music of the Motion Trio flows together to create a seamless whole, as was quite evident on its self-titled debut, Motion Trio (European Echoes, 2010).

The trio returns with saxophonist Amado, cellist Miguel Mira and drummer Gabriel Ferrandini, and adds a fourth tributary with trombonist Jeb Bishop, best known for his work with the early Vandermark 5, saxophonist Peter Brötzmann's Chicago Tentet, Rob Mazurek's Exploding Star Orchestra, and his own bands Lucky 7s and The Engines (which he co-leads with Dave Rempis). The additional watercourse neither diverts nor disturbs the improvising trio; Bishop does, however, deepen the sound.

Recorded live the Jazz AO Centro Festival in Coimbra, Portugal the foursome instantly composes three very balanced and lengthy pieces. The opener is not so much a call-and- response between Amado and Bishop as it is two defenders standing back-to-back, discharging notes at all comers. The intensity spike is heightened here by Ferrandini's barrage and Mira's attack (wow, that's a cello?). Halfway through the piece the tone lightens, with Bishop and Amado applying longer lines, stretching out the sound. Nothing shifts, but the load is carried by individual players, then duos, and then, in staggering immensity, the entire quartet. "Red Halo" opens with a cello solo before some inspired and energetic jazz is passed among the players.

The noteworthiness of Burning Live is the consistent flow of ideas. The band maintains momentum even in the quietest moments. "Imaginary Caverns," the album's central piece—and its longest, at nearly 26 minutes—opens with a conversation between Amado and Bishop's muted trombone. This lingering lollygagging nature has Bishop trading off with Ferrandini, followed by the trio's full flight, before Bishop reenters. The impetus of the music carries the players inside its cascading form, and just keeps rolling along.