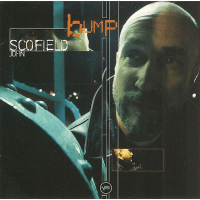 Ever since he signed with the Verve label a few years back, guitarist John Scofield has been on the upswing of the trendy movement we’ll call, for lack of a better term, the "Acid Jazz" scene. He scored really big with A Go Go, his critically-acclaimed 1998 collaboration with the supergroup Medeski, Martin, and Wood. Now Bump enters the ring and it becomes immediately evident from the opening strains of "Three Sisters" that this one’s going to be another knockout.

Damn near as funky and danceable as its predecessor, Bump pushes the envelope just a bit further with a mild "techno" flavor thrown into the proverbial bubbling and boiling stew. A case in point, the saucy jumbalaya of "Beep Beep" includes drummer Eric Kalb’s "Nawlins second-line" groove, Scofield’s overdubbed acoustic and electric guitars, and keyboard samples akin to Bill Laswell’s industrial twang. The hooks abound, with Scofield’s writing cagey enough and adequately varied to insure your alertness, from the sullen moodiness of "Kilgeffen" to "Swinganova’s" sprightly samba beat.

Hangin’ with some of the homeboys of the younger set, Scofield draws on a number of different rhythm combinations, with players on hand from such groups as Deep Banana Blackout, Sex Mob, and Soul Coughing, along with the return of MMW’s Chris Wood on bass. As an added bonus for those of you with the computer peripherals to handle it, this enhanced disc sports a 10-minute segment featuring an interview spot with Scofield and footage in the recording studio. Of course, even without the added visuals, the ear candy’s sweet enough to keep you "bumpin’" for hours.Collective