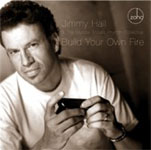 Singer/harmonicist Jimmy Hall was once a Wet Willie. The band, formed in 1969, went on to create some lively, good time music that found its spirit in the blues, rock 'n' roll and a tinge of white soul. After they had their day in the sun, they disbanded (though they still continue playing concerts as Wet Willie when Hall is in the line-up). Hall moved to Nashville playing the blues, working with Hank Williams Jr. ( who has the blues in his blood) and recording his own Rendezvous With the Blues (Rockin' Camel Music, 1996). The aptly titled Build You Own Fire features songs written by Eddie Hinton.

Hinton was a troubled person but he wrote some mighty fine songs. Evidence is seen not only in his recorded work but also on the songs here, which were discovered by producer Tallan Ware. They speak of everyday life and are bathed in the blues and its tributaries. Hall makes them all the more significant. The choice of songs brings out the depth and range of his voice, and he sings with power and conviction. Ware also assembled the Muscle Shoals Rhythm Collective, which makes a significant contribution to the sound of the record.

One of the strongest songs is the poignant "Cover Me. Hall is in gut-wrenching form without being over-dramatic. He knows exactly how to draw the right amount of emotion and make it compelling. He boogies down for "Poor Old Me, turning on the heat with Larry Byrom and Greg Martin biting down on the beat and driving the pulse with their guitars. "I Found A True Love, a blues 'n' boogie tune, has a lighter texture. It's a positive love song and shows another side of Hinton. There is also an interesting interview with David Hood, one of the original Muscle Shoals Rhythm Section members, on Hinton.

Hall, Hinton and the Collective make for a potent and entertaining combination.