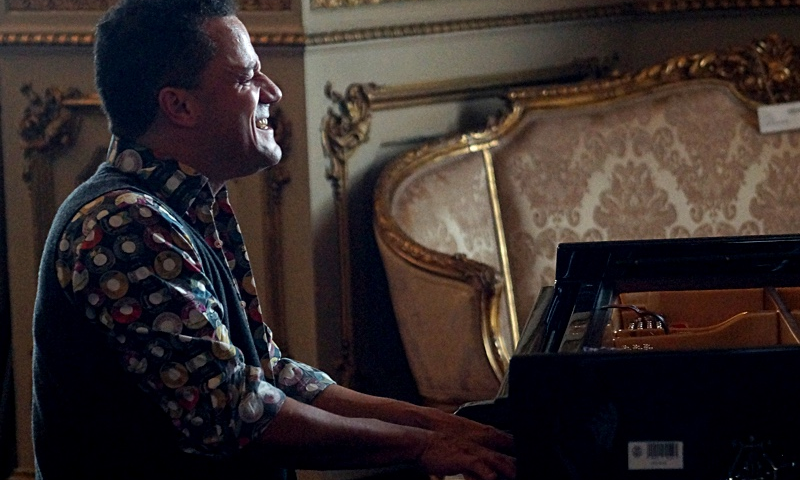 Mid November in Buenos Aires is a special time of the year. True to the meaning of the city's name, the air is crisp and fresh and blossoming jacaranda trees bathe the greater metropolitan area in a dazzling shower of purple hues. And, for lovers of jazz in all its forms, the annual Buenos Aires International Jazz Festival stages an extravagant six-day program of concerts, workshops and solo recitals that features 400 musicians at 18 far-flung venues. From ornate concert halls to unadorned neighborhood cultural centers and chic jazz clubs, aficionados are faced with a bewildering number of performance options.

Celebrating its 10th year, the festival serves as a showcase for native Argentine jazz talent while presenting an eclectic mix of top drawer artists from abroad. Adrián Iaies, the noted Buenos Aires-based jazz pianist and composer, is also the festival's artistic director. He stresses the collaborative nature of the event, taking every opportunity to present foreign and local artists on the same stage. He also challenges musicians to step outside of their comfort zones. For instance, to observe the 25th anniversary of the death of Astor Piazzolla, the country's revered tango nuevo composer and bandoneonista, Iaies commissioned Brazilian pianist André Mehmari to bring an outsider's point of view to Piazzolla's well known repertoire. A similar approach was employed for a Thelonious Monk tribute, which featured three Argentine pianists interpreting the composer from three disparate stylistic perspectives. The festival is, as accurately described in a headline in Clarin, one of the country's major daily newspapers, "A celebration of jazz in all styles."

Given that I'd attended the festival for the past several years, focusing on the event's showcase concerts and more celebrated artists, I decided to experience five nights of concerts in the same manner as the average Porteño (resident of Buenos Aires) by attending tightly scheduled 45-minute performances of domestic groups at an outdoor venue— the Parque Centenario amphitheater in the middle class suburb of Caballito. As close as I got to the centerpiece concerts, which were headlined by bassist Gary Peacock with drummer Joey Baron and pianist Marc Copland, was sharing a hotel elevator ride with pianist Matthew Shipp and attending a Sunday afternoon solo piano recital by Jacky Terrasson. More on that later.

In a city renowned for its parks and public spaces, Parque Centenario is special. The 25-acre expanse, surrounded by apartment buildings and restaurants and ringed by flea market-type commercial stalls, is a mecca for neighborhood residents. The centerpiece is a lagoon, home to a large colony of swans and ducks. On weekends, the park is filled with picnickers, joggers, young lovers, and families on an outing. One of the most important facilities is the 1700 seat Anfiteatro Eva Perón—an amphitheater originally constructed in 1951 and named in honor of Argentina's iconic first lady. Destroyed by a fire in 1959, it was rebuilt in 2009 and has since become one of the city's most important outdoor concert venues. Located far from the center of the city, where most visitors to Buenos Aires will stay, arriving in time to get a good seat for the opening set required a 45-minute cab ride—fortunately, not prohibitively expensive (and the concerts are free of cost).

Virtually all of the Parque Centenario concerts this season featured native talent; in some cases, groups from distant provinces who were appearing in Buenos Aires for the first time. The Tito Oliva Jazz Cordillerano (a reference to the country's Andean region), led by pianist and composer Oliva, hailed from the small city of San Juan. Featuring a bandoneon player, the unit explored the grandiose and passionate sentiments of the tango on some arrangements, rock fusion and "New Age" influences on others.

Another visiting ensemble, the Córdoba Jazz Orchestra from Argentina's second largest city, has been in existence for a little over a decade. It was established to provide Córdoba-based jazz musicians, composers and arrangers an opportunity to exercise their talents. A traditional big band format with added percussion, guitar and vibraphone, the group featured highly technical ensemble playing and dramatic chords. Its arrangement of Freddie Hubbard's "Little Sunflower" spotlighted cascading brass lines and dancing flutes. Of note: The entire five-person trombone section was all female. The band concluded its set with a composition and arrangement by bassist Pedro Giraudo, a Córdoba native noted for his success in New York with his big band and several critically-acclaimed recordings on the Zoho label.

Nolew, a collaborative featuring well known Buenos Aires guitarist Ricardo Lew and pianist Ricardo Nolé, proved that even a duo could capture and hold the attention of the Parque Centenario audience. Easy flowing and virtuosic performances touched on such regional styles as Brazilian modes and candombe, the rhythmically vibrant idiom created centuries ago by African slaves in neighboring Uruguay.

The other end of the stylistic continuum was offered in the next set featuring pianist Manuel Fraga and vocalist Helena Cullen. The loquacious Fraga, one of the city's most celebrated pianists, crafted an intimate set filled with banter and a program that evoked an evening of cabaret jazz in a stylish club. His solo interpretation of Antonio Carlos Jobim's "How Insensitive" was technically ravishing. Singer Cullen, regarded for her jazz chops and affinity for Brazilian bossa nova, provided stylistic adept versions—in English—of such standards as "Summertime," "My Funny Valentine" and "Get Out of Town." Another unit from the country's interior, the Tucumán-based Melina Imhoff and Julio Goytia Quartet featured the vocalist and guitarist in a set of jazz standards. Imhoff boasts a Stacy Kent-style tonality but a fierier delivery, as she demonstrated on tunes like "Body and Soul," "Cry Me a River," and "Speak Low." Goytia and his rhythm team provided sympathetic backing, and the guitarist added whistling to his improvisational repertoire.

A flashy change of pace was offered by the Bluesbrass Kings, a nine-piece band featuring guitarist and vocalist Maximiliano Hracek and a five-member horn section providing occasional solos and tight, brassy accents. Sporting a set list that included hits by B.B. King and Fats Domino, the group wrapped up its raucous set with a crowd-pleasing arrangement of the 1940s Louis Jordan swing hit "Caldonia."

The Jazz Meeting Crew brought mainstream jazz back to the fore with a hard bop-centered set. Fronted by alto saxophonist Federico Alvarez, the quartet coasted through a polished set of standards like "What is this Thing Called Love" and "April in Paris." The reedman has a commanding knowledge of such alto stalwarts as Phil Woods and Charlie Parker and displayed a biting, urgent attack.

Another group that provided a different slant on the tradition was the 13-member Sotavento Big Band. In addition to a standard rhythm section, the group featured only woodwinds—five tenor saxophones, two clarinets and one alto. This unique combination of sonorities was employed to perform jazz-oriented version of traditional and modern tango.

The Parque Centenario audience proved to be unerringly supportive of the performances, regardless of style. The level of audience enthusiasm was exemplified by a dedicated group of swing dancers, who swayed to anything remotely associated with classic swing music. When Swing '39, a quartet featuring bass, clarinet and two guitars that's dedicated to the Django Reinhardt era, took to the stage, the hipsters were prepared, rolling out a large swath of linoleum to make the impromptu dance floor more welcoming. And swing they did.

A true highlight of the Parque Centenario concerts was the opportunity to enjoy the artistry of perhaps the country's most notable living jazz artist, bassist Jorge López Ruiz and his quartet. Active since the early 1960s, the 83-year old veteran is a walking Encyclopedia of Argentine jazz. In his homeland, he's been regarded as the equal to the likes of Charles Mingus and Ray Brown. One of his albums was release as Amor Buenos Aires in the U.S. on the Catalyst label in 1977. His acclaimed 1967 album El Grito (The Scream) was considered a decade later so threatening by the military dictatorship that it was banned. The bassist's set of standards and originals was denoted by unaffected virtuosity and intuitive interplay with his supporting cast, including the up-and-coming guitar talent Tomás Fraga. The genial Ruiz's daughter Cecilia, a dark-toned vocalist, was a featured guest.

My one concession to the festival's more heralded programming was to attend the aforementioned Sunday afternoon solo piano concert by Jacky Terrasson, performed in the gilded confines of the Salón Dorado in the fabled Teatro Colón, one of the world's top five opera houses. Without ever uttering a word, the pianist unleashed a subconscious torrent of keyboard artistry that included his singular takes of such standards as "Somewhere Over the Rainbow," "Caravan" and "St. Thomas."

The annual Buenos Aires International Jazz Festival provides an uncommon opportunity to discover new talent in one of the world's most welcoming and culturally rewarding cities.