Buddy Guy with Matt Andersen at The Space at Westbury 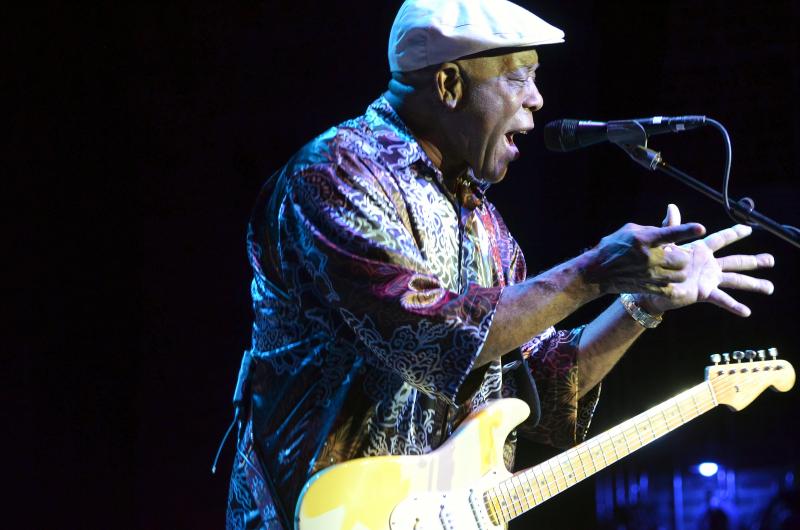 Buddy Guy is a national treasure. The blues titan is one of the last remaining links to the Chess Brothers, Muddy Waters, Howlin' Wolf, John Lee Hooker, Guitar Slim, Little Walter and Willie Dixon. Whether it is the Chicago blues (of his adopted hometown) or the down home blues of the Delta (where he grew up in Louisiana), Guy is the living embodiment of the genre.

On a cold mid-November evening at Westbury, NY's the Space, Guy more than lived up to his pedigree as he (along with his hand-picked opening act), brought a rollicking evening of amazing blues to the midsized Long Island venue. He showed off his virtuosity with some nimble finger-picking, by playing behind his back, using drumstick to pick out a lead, and by using his belt buckle and shirt buttons to coax out some tasty riffs. At one point during the show he asked, "Do you have a curfew?" When the crowd screamed, "No!," Guy responded by saying, "Shit! Then I can play all night!" He then proceeded to walk through the entire venue, up into the rafters around the standing room portion of the crowd, through the orchestra seats and back onto the stage while playing a hellacious ringing lead without missing a beat.

Opening act Matt Andersen quickly won over the crowd with his bluesy and soulful acoustic set. Andersen, who accompanied himself on acoustic guitar (with an electric pick-up) announced himself by simply stating, "My name is Matt Andersen and I'm gonna play you some songs. Then I'm gonna stop." Simple straightforward and to the point...except at the end, from the reaction of the audience, stopping was the last thing they wanted Andersen to do.

The Canadian singer-songwriter was in a very playful mood as he delivered bluesy version of "Make You Stay" from Coal Mining Blues (Busted Flat Records, 2011), "I Lost My Way" from his 2014 True North Records release Weightless (prior to which he quipped, "I'm down here visiting from Nova Scotia. Really happy to have all the warm weather here."). He also managed to played short passage of the theme from "The Pink Panther." "Let You Down" was introduced with a the statement that the "tune proves the point that if you date a musician and break up with him, he's going to write a song about you." Andersen's powerful set ended with his joking that he hoped that the audience "enjoyed yourself; if you haven't don't tell anybody. That's my rule." He claimed that his last song, "The Devil's Bride" was about a "couple who came to everyone of my shows back home and got into a fight each and every time. While I would be playing I could always see her just talkin' and talkin' and him sitting there doing a slow burn and simmering..."

The jaw-droppingly talented but criminally under-rated singer won over a large portion of the crowd with his commanding presence, strong expressive vocal delivery, straight-forward blues fretwork and winning personality. As he exited the stage it was clear that he had made a large number of new fans.

After Andersen exited, the lights came up for a short moment before Guy, the six time Grammy Award winning member of the Rock 'n' Roll Hall Of Fame took the stage by storm with a blazing version of "Damn Right I've Got The Blues." After what was the first of a number of standing ovations, Guy came out front and center and said, "Thank you for inviting me here tonight. I want you to know that just because I'm from Chicago, I didn't bring the fucking weather...Tonight I'm going play something so funky you can smell it and it goes like this." He and his band (Ric Hall on guitar, Orlando Wright on bass, Tim Austin on drums and band leader/keyboardist Marty Sammon) dove into "Five Long Years."

The evening was just as much about the music as it was about the history of the music and... the future of the music. Guy played many of the expected (I Just Want To Make Love to You," "Slippin' In," "74 Years Young" from 2010's Silvertone/Jive Living Proof album and "Skin Deep") songs. He played "Blues In the Night" with its "My Mama done tol' me/When I was in knee pants lyric." He told stories about Berry Gordy shopping acts (to Chess Records and when the label passed on Jackie Wilson and some others, Gordy went to Detroit and created Motown). He also spoke of his early influences and friends and about trying to make a name for himself in the Chicago music community (while paying tribute to his influences, contemporaries and friends by offering up snippets, and occasionally longer passages of John Lee Hooker's "Boom, Boom," Muddy Waters' " Hoochie Coochie Man," Guitar Slim's "The Things I Used to Do," as well as stunning versions of Ray Charles' "What'd I Say," Marvin Gaye's "Ain't That Peculiar," Cream's " Strange Brew" and a number of other classics).

One of the highlights of the evening was when Guy called a little boy to the stage and asked his age. The boy responded that he was eight. Guy then asked what kind of guitar that the youngster had. The boy said, "Electric," causing the crowd, band members and Guy to chuckle. The bluesman then turned to his roadies and asked one of them to bring a guitar out to the little guy. He may have been little, but he definitely had the chops. Guy and his band followed the boy's lead and backed him on a Dick Dale-type tune. Guy then asked about the boys ability to play keyboards. When the boy nodded affirmatively, he was brought over to Sammon's rig, sat down and played the Beatles' "Ticket To Ride" (to which Guy added tasty electric flourishes). After asking a few more questions, Guy told the youngster to "bring your guitar next time and always play what you know." The boy left the stage sporting a huge grin.

Guy then got right back to business. He played "Skin Deep" (before which he told a story about a conversation he once had with his mother that went something like, "Mama I'm good looking," to which she replied, "Yes you are, but looks are only skin deep."), followed by Jimi Hendrix' "Voodoo Child (Slight Return)," Cream's "Sunshine Of Your Love" (during which he stalked his way across the stage like a panther ready to pounce, used a towel to play an unforgettable solo and played with his teeth) and Otis Rush's "I Can't Quit You Baby."

When the song ended, Guy and his band took their bows and the appreciative audience showed its love with a standing ovation. The jovial bluesman signed autographs, shook hands, spoke to his adoring public and spent a few more minutes in a one-on-one conversation with the eight-year-old budding musician.