My music is almost like the gumbo in Louisiana. You go get it and sometimes you don?t know what kind of meat?s in it, but you just eat it and if it tastes good, just keep eating.

Buddy Guy, in spite of his eagerness to constantly praise those who came before, is the most dynamic bluesman on the scene and has been for many years. He's a guitarist without peer in his idiom, drawing admiration from just about all corners of the rock and blues world, from Jimi Hendrix to Eric Clapton to Stevie Ray Vaughan.
He's known for his scorching electric guitar, but when he switched gears, his all-acoustic Buddy Guy, Blues Singer album won a Grammy this year. And his live show at the venerable Proctor's Theatre in Schenectady, NY, on March 19, was a stone cold, testifyin', I-may-have-the-blues-but-it- feels-good experience. It was mostly acoustic, but each moment dripped the blues. The lack of electric power didn't result in any loss of emotional power. In fact, it was the most old-fashioned style of the blues, before electric guitars were popular. Guy himself didn't own one for years, learning his trade in Louisiana on acoustic.
Dressed casually and wearing a floppy hat, Guy played seated on a stool. His voice was strong, showing influences of two of his idols, Muddy Waters and John Lee Hooker. It was a Muddy Waters album, in fact, made in 1963 ( Muddy Waters, Folk Singer , Chess) featuring a 27-year-old Buddy Guy, which inspired Guy's latest CD.
"My record company called me and said did I remember doing that with Muddy," Guy said days before the show. "And I said, 'Man, I don't think I forgot anything that I did with Muddy.' They suggested that I go down and take a chance with some of those Son House tunes and a few older ones."

Guy, accompanied by a rhythm guitar, upright acoustic bass and drums, kicked off the set with "I Done Got Old," but it sure isn't autobiographical. The acoustic picking was strong and articulate, powerful and emotive. His use of dynamics, tickling soft and low at times and screeching at others, is expert. He played with soul, preaching and shouting all in one package.

While he covered some of the acoustic songs on the new album, it was nice to hear Guy use other tunes, like "That's Allright," which jazz fans may know as a Mose Allison staple once upon a time. It wasn't just a "cover my CD stuff" outing.

Guy's voice throughout was nearly as expressive as his guitar. But not quite, because his guitar work was out of sight. Rhythmic bursts, searing single-note runs. Sometimes he bent the strings so much, drawing so much sound, that it's a wonder they didn't break. There are people playing acoustic blues, but no one who plays like this. While he's a definite crowd pleaser, Guy gets into the music because he loves it. Face contorted, fingers workin', Guy would get so down and funky at times that a grin would cross his face and an almost involuntary "ahhhhhhhhhhhhhh shit!" — in the joyous sense — would escape his lips.

"Louise McGhee" by Son House from Blues Singer was a treat, and Guy showed his gospel influence as he screeched the lyric. "Hoochie Coochie Man" was another fulsome blues triumph. Guy caressed "My Babe" with a bit of an R&B lilt. Marvin Gaye's "Ain't That Peculiar" was an unexpected tune that was done well.

Guy remembers his early days of watching guitarists play the blues in the community, for little more than the fun of it and the release of it. "Saturday night fish fry with acoustic guitar," he said, "sitting on a porch with a hat. And you'd throw your pennies and dimes in. I came up watching that. As soon as you get enough in the hat, the guitarist would say, 'Go get one.' That 'one' was a drink, and they'd share it and enjoy the music for the rest of the night."

"The first Strat I saw was the late Guitar Slim who made a famous record, "Things I Used to Do," he said in a pre-show interview. "And I got to see B.B. King, and those were the two guys coming out then with the hot sound on what they call the chitlin circuit. And I saw Guitar Slim. He was such a wild man on the stage. I said to myself, if I ever learn how to play guitar, I want to act like him, but I would love to be able to shake my wrist like B.B. King. Then I started picking up from Muddy and T-Bone and everybody. I didn't get hooked on one of them. I just loved them all so well I wanted to get a little piece of everything. 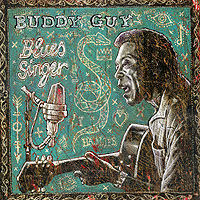 "My music is almost like the gumbo in Louisiana. You go get it and sometimes you don't know what kind of meat's in it, but you just eat it and if it tastes good, just keep eating."

Fans in the audience still yelled for other stuff (often told by Guy to wait, he'd get to some, "but I'm going to do what the fuck I want first"), and finally, Guy was off the stool, picking up his polka- dotted Stratocaster and launching into electric — and still electrifying — blues.

It was Guy who helped pioneer this hot, raucous style of guitar that was imitated by Clapton, Hendrix and those guitarists of the British Invasion of rock and blues in the 1960s, and he still rules the roost. As he explained, "Actually I was doing it when I did sessions with Muddy, Howlin' Wolf and Little Walter and them. Before the session would start, I would turn my guitar up and let them hear that, and they would kick me out. About six months before [Chess executive Leonard Chess] died, he had heard about Hendrix had left New York and went into London, and Cream had come out and I think it was the Yardbirds and who else was playing it. He called me and said, 'Motherfucker, that shit you've been trying to show us is hot as hell and selling records and we was too fucking dumb to know. Now, we're going to let you record.' I was kind of pissed at him. I never did get a chance to do it [at Chess]. He died shortly after that."

The sound of his screaming electric work has been going on just about ever since. On this night, he cranked out "Drowning on Dry Land." And, as is his wont, Guy also likes to be a showman, which he learned from Guitar Slim. Soon after he picked up the Strat, Guy left the stage, strode up one aisle of the beautiful theater, even sat down in about the 20th row as he played and sang, then continued up the aisle, across the back and down another aisle to the stage. All the while preaching on guitar.

Back on stage, he ran through a blistering "Damn Right, I Got the Blues," the title cut from his best-selling album (1991, Silvertone). He tossed in pieces of Hendrix's "Voodoo Child" and Ray Charles "What'd I Say," then tipped his hat to "the guy who taught us everything we know," with a cover of B.B. King's "Sweet Sixteen."

"The world is mad," Guy said a few days before the show. "So when I go to the stage and see my guitar playing or whatever I do makes somebody smile, I feel like I'm the richest guy in the world because if you got any kind of problem or difficulty, I made you forget them for a minute, because I saw you smiling."

In that case, he definitely left Proctor's a wealthy man.

Visit Buddy Guy on the web at www.buddyguy.net .