Anders Osborne: Buddha And The Blues 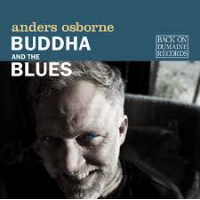 NOLA songwriter/musician Anders Osborne's frequent and diverse studio and stage collaborations, including but not limited to those with Luther and Cody Dickinson of North Mississippi Allstars and Phil Lesh of the Grateful Dead, all lead back to solo work like Buddha and the Blues, self-composed tunes rendered all the more pungent through musicianship tuned to the same rootsy authentic frequency as the material. This is a record as potent as it is alluring.

The uniform presence of a stable unit of accompanists here reflects the value Anders Osborne places on savvy musicianship comparable to his own. Rightfully familiar names appear in the form of bassist Bob Glaub and guitarist Waddy Wachtel, both of whom contributed mightily to estimable works of the late great Warren Zevon such as Excitable Boy (Asylum 1978) and The Envoy (Asylum 1982). But there are others too, even apart from charter member of Tom Petty's Heartbreakers, Benmont Tench, whose piano notes on "Alone" ring through the rumble of Glaub's instrument and the slashing chords of Wachtel.

Long-time Neil Young compatriot, drummer/percussionist/vocalist Chad Cromwell, plays throughout the album, but also produced this LP, assisted by another regular studio collaborator of the Canadian rock icon, engineer Niko Bolas, handling the bulk of the technical chores. Little wonder the purity of the acoustic guitars and Windy Wagner's winsome falsetto comes through not loud and clear, but understated and intimate, on "Fields of Honey. " The latter's voice is ideally suited to "Running," the uplifting folk-rock cum blues tune that follows, where concise playing in turn fits the lean but layered arrangement: bottleneck guitar adds a delightfully unpredictable quality to what otherwise might sound staid.

And more than a few tracks on Buddha & The Blues accentuate vocal harmonies and guitars, chiming and otherwise (no doubt the main reason Tench sounds so comfortable with his fitting contributions). In fact, intertwining lines from acoustic and electric versions of that latter stringed instrument dominate "Escape," so much so that this track is the only one here that seems to end prematurely: a definite sense of musicians entering that zone of preternatural jamming pervades the cut just as it concludes. Yet, as with this title tune, there's always a sense of all the players communing together: this is definitely not the sound of Anders Osborne and a backup group. Rather, there's bonafide unity in the shared, unhurried pace to "The One I Love" that alternately tranquilizes and moves.

Likewise, rare is an album so well sequenced as this one, where its tracks—especially a penultimate one like "Traveling With Friends"—so clearly signals the home stretch of a song cycle, not just a collection of tunes. In fact, impeccable logic holds to the finish: with its finale of these nine originals, "Alone (Unplugged)," Anders Osborne may speak to all his listeners, but with this one, he's also directly (and correctly) addressing those companions with whom he completed this superb record.

Alone; Fields Of Honey: Running: Smoke And Mirrors: Aching For You Love: Escape; Buddha And The Blues; The One I Love; Traveling With Friends; Alone (Unplugged).

Title: Buddha And The Blues | Year Released: 2019 | Record Label: Back on Dumaine Recoreds