By GLENN ASTARITA
February 23, 2014
Sign in to view read count 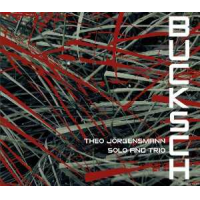 Revered German clarinetist Theo Jorgensmann has played an integral role in the European free jazz scene and is one of several artists who helped revitalize the instrument within avant-garde flanked jazz and improvisational vistas. Here, the artist predominately performs solo works on his G-low clarinet, yet unites with his trio culled from a live performance in Luneburg, Germany on the aptly titled "Interweave Thoughts."

This musical portraiture duly mirrors the suggestion of a dynamic interweaving of thoughts, featuring a complementary perspective, delivered by his cohorts, acoustic guitarist Hagen Studemann and bassist Christian Sydney Ramond. Indeed, it's a free- form endeavor, but Ramond's swerving arco lines transmit a sweeping and winding foundation for the soloists. He basically tenders the interweaving cog for Jorgensmann and Sydney's expanding and contracting articulations. And the guitarist's closed handed harmonics projects a colorific additive as Jorgensmann wavers the pitch and melds melodic intervals into the grand schema. Here, the trio gels within an oscillating and asymmetrical climate that pronounces a vibrantly inferred meeting of the minds. As the group format signals a contrasting vista to the leader's swinging, bopping and at times, unconventional solo jaunts, dispersed throughout the track mix.