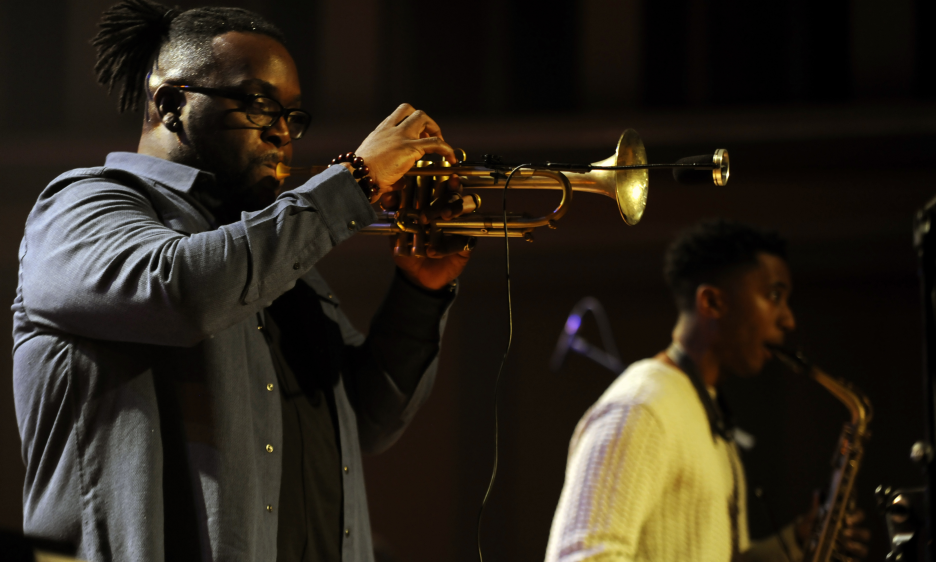 The 10-day Brussels Jazz Festival is held at Flagey, an arts complex in Ixelles, which lies south-east of the city centre. It's an eye-catching Art Deco building from the late 1930s, created by architect Joseph Diongre. This former radio and television studio has the look of a steamship, illuminated from inside with mood lighting glowing through its windows, in different hues for different portholes. With much of its wooden interior intact, Flagey's converted, acoustically-welcoming studios provide mixed-size venues for performances.

Renovations were completed in 2002, following a near-death experience around 1998: the distinct possibility of demolition. Phew, it didn't actually happen! Instead, the steamship was allowed to blow its stacks once more, in a fresh incarnation. Flagey's focus is on live music and cinema showings, plus it also has a couple of bars. The surrounding area also boasts multiple cafés and pubs, and the venue is located right in front of the long, thin, Ixelles twin lakes, a key scenic feature of this creatively-inclined area.

The Belgian piano duo of Heleen Van Haegenborgh and Christian Mendoza (although the latter grew up in Peru) ostensibly combine jazz and classical backgrounds, but if we didn't know, it would have been difficult to disentangle these traits, once they started playing in unison. Even though much of their lunchtime set in Studio 1 was devoted to György Kurtág's renderings of Johann Sebastian Bach, there was much that sounded improvised, and beyond any particular genre. Mendoza and Haegenborgh mostly sat at the same piano, forearms sometimes crossed and contorted, spilling patterns, rolls and floods that suggested Steve Reich or Conlon Nancarrow. There was also a striking stretch where Haegenborgh sat at an upright piano, running her fingers along its exposed strings, creating scintillating harp textures, humming and shimmering, making cascading low-toned strikes, and finally a strategic bass-string scrape with what looked like a metal bowl.

Next, the Nigerian Afrobeat drummer Tony Allen headlined in Studio 4, but his mission was to celebrate the aura of Art Blakey, if not that jazz drumming great's actual sticks-style. Allen has a more measured method nowadays, as he works scientifically around his kit, formulating limber funk sequences. There was a relaxed springiness to the groove, which wasn't particularly Afrobeat ,or Buhaina-beat either. The set lacked lustre, never quite catching fire, which was most unfortunate given the thundering power and detail possessed by the old Blakey in his prime (or even not in his prime). The sextet became livelier for "A Night In Tunisia," which had Jean Phi Dary switching between acoustic and electric pianos, as well as vocalising in the desert style.

In complete contrast to virtually all else, Book Of Air played an early Sunday afternoon set, arrayed behind a large screen, with players and audience all sitting on the large Studio 4 stage. This group springs from the Granvat collective in Antwerp, featuring brothers Bert Cools (guitar) and Stijn Cools (drums). Technically, the screen could have been deemed the reverse side, but as the audience were lounging on cushions, across the actual stage, it became the front. The visual content of this Fieldtone project could be described as macro-static, and the music as minimal-glacial, poised and meditational. Were the apparently motionless and only occasionally snail-changing images blow-ups of terrain from a satellite vantage point, or were they zoomed-in studies of small organic spreads? Similar questions could be asked of the music. Whilst sleep was a possibility, there was in turn the chance of becoming hyper-alert, if the eyes and ears steadily homed in on the eventually captivating audio-visual scenarios. The music was strangely genreless, but appealing to those listeners who gravitate towards ambient, minimalist, or chamber jazz tonalities. The line-up also included Indrė Jurgelevičiūtė, playing kanklės, a Lithuanian zither-type instrument. Initially, in the near-darkness, it looked like an amplified tabletop, across which small metallic objects were being delicately moved. The other members used more common instruments, though with uncommon quietness (electric guitars, acoustic bass and drums/percussion).

On the festival's final night, the Chicagoan trumpeter Marquis Hill led his Blacktet through a triumphant celebration of hardcore post-bop. They produced a sophisticated, slick groove, but around ten minutes into the set, saxophonist Braxton Cook released a wiry alto solo, brash and bright, tailgated by a belligerent vibraphone solo, courtesy of Joel Ross, his fast-moving shadow cast high and gigantic across the opposite wall. This began an ongoing sequence of spirited escalation, as each band member released their energies, working off each other's continually increasing power. Their funk was coiled to bounce, through Horace Silver ("Hombres") into Hill's own "Black Harvest," taken at a racing skip, replacement drummer Jonathan Pinson soloing with vibes interjections. They rested with "Maiden Voyage," taken very slowly, measured for a while, before "Minority" resumed the hurtling, dominated by the leader's most vibrantly burning solo, literally a show-stopper, as the audience demanded that this stunning outfit run over time.