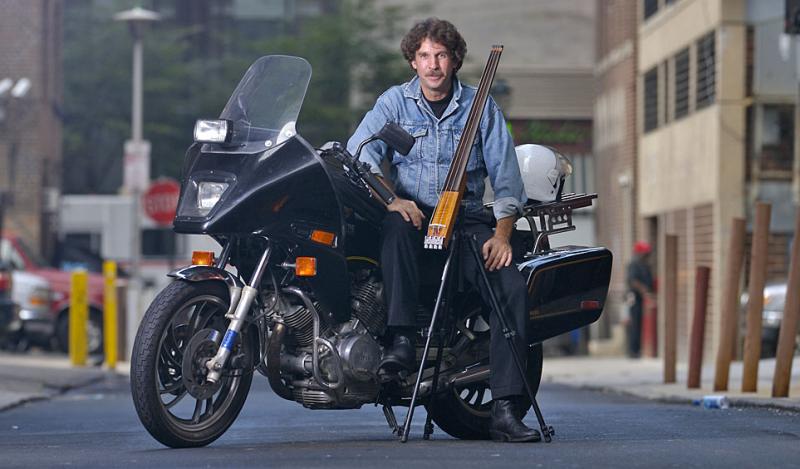 By BRUCE KLAUBER
October 11, 2012
Sign in to view read count
Saying that Bruce Kaminsky is, after almost 40 years, among the most sought-after bassists on the eastern US coast doesn't even begin to tell the whole story. Or saga, if you will.

He maintains that being a musician is synonymous with being an entrepreneur. In line with that, his entrepreneurial activities have focused on the invention and marketing of the electronic upright KYDD bass, the portable electric instrument classroom lab called the KYDD Lab, and the KYDD sound reflector for grand pianos.

But there's much more to this chronicle. For 28 years, he worked in a senior production capacity for the International Association of Jazz Educators. He teaches at several universities and privately; leads a musical group comprised of Arabs and Jews and brings it into area schools; participates in a Middle Eastern ensemble; works on behalf of the educational Musicopia organization; and conducts innovative business seminars related to applying the underlying concepts of music to ultimate business success.

Because he's an affable, intelligent, well-read and well-rounded, welcoming and non-judgmental presence, he's been successful at all of his endeavors. He has evolved as a bassist—once very good, now great—and has progressed technically, personally and professionally in an industry that demands day-to-day evolution.

And only a very few have proven to be up to those demands.

Kaminsky simply describes himself as a "communicator," and maintains that all the "dots" that comprise the various elements of his career can and will be connected.

Everything he does is an outgrowth of his work as a bassist, something he's done since the age of 14, playing with the likes of Tal Farlow, Bucky Pizzarelli and Larry Coryell, and trombonist Jimmy Knepper.

Pianist/producer Andy Kahn, who has played with Kaminsky on and off for nearly 40 years, is better qualified than most to comment on Bruce Kaminsky, bassist.

"Anyone fortunate enough to have played with bassist Bruce Kaminsky remembers every experience," says Kahn. "That's because Bruce not only lends both his rich knowledge of music and his superb dexterity on his instrument to every tune he performs, but also his magnanimous and exuberant personality. To play with Bruce Kaminsky is a joyous experience, no matter what style of music is being performed. I know, because I've had the opportunity to create music countless times with this man. A finer musician, educator and authentic gentleman does not reside on this planet."

Stellar endorsements notwithstanding, Bruce Kaminsky conducts his myriad of activities in a matter-of-fact, straightforward manner. Sure, he's ambitious, but one would never know it. When pressed, though, he will admit that that his unique activities as an educator are near the top of his list of "very important to-do's."

While he teaches at the Drexel University, Montgomery County Community College, University of the Arts, and privately, perhaps closest to his heart are his efforts on behalf of the Musicopia organization, and as a bassist, his leadership of Spice Route Ensemble and participation in Atzilut.

The mission of the non-profit Musicopia, which began in 1974 as "Strings for Schools," is to fill the void in music education that resulted from budget cuts. At the start, Musicopia had one string quartet that performed in Greater Delaware Valley Schools in hopes of inspiring—and educating—youngsters about classical music. Today, it's considered to be the largest provider of music education programs on the east coast, offering over 700 programs annually in more than 40 musical genres, including jazz, world and ethnic music.

Kaminsky has used his bass, his personality, knowledge, dedication and integrity to bring various types of music to schools via Musicopia, and has made a very special impact with The Spice Route Ensemble and Atzilut.

He again adds that his mission, as leader of The Spice Route and his participation in Atzilut, is to "inspire cultural cooperation through music."

And anyone who has ever heard either group in concert does, indeed, walk away inspired.

Given his belief system, and what he's accomplished in music and for humanity in his career thus far—just by bringing people together, or "connecting the dots," as it were— there's good reason to believe that his hopes for "cultural cooperation through music" may someday be a reality.