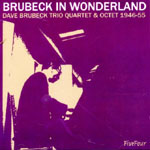 Brubeck recorded his most durable work with Time Out, which launched a series of successful albums by the stately jazzman for the Columbia label in 1959. However, his earlier works for the Fantasy label, which find him fully entrenched in the cool scene, are arguably more rewarding. Brubeck had not yet stumbled upon the gimmickry of the odd time signatures and tributes to foreign countries that dominated his '60s recordings. Instead, these early recordings feature a more ragged kind of daring, as the pianist imposes his skewed ideas of rhythm and meter to a program made largely of standards.

The bulk of the material on this compilation culls tracks from the series of albums that Brubeck recorded live at various colleges from Oberlin (Ohio) to the College of the Pacific (California). Brubeck is already monkeying with introductions and adding rhythmic displacement to the heads of tunes like "All the Things You Are that demonstrate that he's up to something a little more interesting than everyone else on the West Coast.

"Alice In Wonderland showcases the beginnings of Brubeck's penchant for beautiful melodies in unusual time signatures (in this case a relatively safe 3/4), a technique that became his bread and butter. These recordings also showcase a mature working quartet with saxophonist Paul Desmond, whose suave, elegant delivery was the perfect foil to Brubeck's choppy, aggressive comping. Sure the later Columbia records are more polished, but at this early date the quartet seems energized and invigorated by all the possibilities offered by the direction Brubeck was heading.

A couple of early tracks kick off the album and show what Brubeck was up to in his earliest recordings. Two tracks from the semi-famous octet sessions have the air of college compositions about them, yet are an interesting detour from the jazz being parlayed at the time. A trio track featuring Cal Tjader on vibes (and then switching to drums) features a bizarrely off-kilter head for "Lullaby in Rhythm and the playfulness of guys coming together to try out new ideas.

Playland at the Beach; Serenade Suite; Lullaby In Rhythm; Mam'Selle; Alice In Wonderland; Crazy Chris; The Way You Look Tonight; How High the Moon; Trolley Song; All the Things you Are; Laura; Stardust; Le Souk; Audrey.