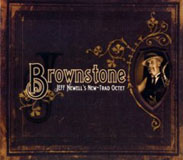 Brownstone, a type of sandstone that evokes the upper class urban town homes constructed at the turn of the 20th century, is also used to introduce the theme of Jeff Newell's latest release with his New-Trad Octet. An assimilation of marches and hymns dating from after the Civil War up to the early 1900s, "New in this case refers to more than just a play on the artist's last name. Pulling the John Philips Sousa classics "Stars and Stripes Forever , "The Lambs March and "The Washington Post and a slew of hymnal themes from the likes of Robert Lowry, Ira Sankey and Fanny Crosby, Newell updates these works with smart, inventive arranging. Resorting to the traditional brass band as the foundational ensemble unit, Newell never hesitates to throw his octet into handsprings through a multitude of musical territories, from Caribbean to full-fledged Mel Lewis Big Band-esque swing. The gem of the album is an original six-part suite entitled "Hymn Pan Alley , an ode to the rich history of hymn writers who lived and worked in Newell's current neighborhood of Fort Greene, Brooklyn.

The Octet is comprised of an interesting timbral mixture of improvisers, from trumpeter John Bailey's post-bop flourishes against Newell's motific lyricism, the effects-laden electric guitar of David Phelps against the soft modernistic piano of Tricia Woods, to the thumping bass of Tom Hubbard against tuba player Marcus Rojas. Together, they provide Newell with a stark palette of broad contrasts to heighten the sense of journey between one musical feel to the next.

For the tenth track, Newell is joined by a completely new octet, this time made up of fellow Chicagoans including trumpeter Orbert Davis, for a rendition of the iconic John Newton work, "Amazing Grace . It is interesting to hear Newell's part writing really fall into place as some of the stiffness and intonation problems that crop up previously in the record evaporate when played by his hometown crew. The album closes out on a Newell original, "Fill the Temple , a hard grooving gospel number with Karl Dixon and Janis Russel on vocals.

Hymnals and marches represent some of the earliest examples of music that could be defined as identifiably American and Newell approaches this material with the veracity of an ethnomusicologist but with the spirit of an adventurer.