By DAN BILAWSKY
September 24, 2018
Sign in to view read count 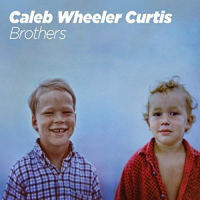 Brotherhood comes in multiple forms—genetic, fraternal, and professional, to mention the most applicable—but all are bound by a sense of fellow feeling and shared experience(s). That truth rests at the heart of this, saxophonist Caleb Wheeler Curtis' debut album.

The obvious nods to brotherhood here come in the form of this album's title, its freewheeling and mercurial title track, and a cover photo showing the leader (on the left) and his younger brother, Nico, as children. But the band of brothers behind this project is also tied into the theme. Curtis calls on friends and kindred spirits—trumpeter Josh Lawrence, bassists Eric Revis and Luques Curtis (no relation), drummer Mark Whitfield Jr., and guest tenor saxophonist Seamus Blake—to help emphasize a personalized plasticity in his music. The results are sharp-witted, bracing, and, at times, wonderfully brash.

While there's a certain degree of volatility to be found here, both from moment to moment and track to track, that shouldn't be mistaken for a lack of integrity or intention. Curtis most certainly has everything set in principle, and the musical countenance he receives from his band mates is completely on point. The marriage of Lawrence's trumpet and Curtis' alto, for example, oozes charm when floating across the hazy atmospheres of David Gibson's "A Place Of Our Own." And the frenzied fracas of "Tried In The Court Of Public Opinion" is puckish, but most definitely pointed. Even a piece like "On The Other Side Of Time"—an improvised miniature with both bassists in play—has solid outlines, with mournful trumpet lighting the way.

The specter of Ornette Coleman can readily be observed hovering over much of this music, as Curtis nods to that dearly departed icon's classic instrumental format, embraces aspects of his angularity, and works with a certain degree of elasticity befitting his legacy. So it's only appropriate that Coleman's name should come to rest in "Cartoon Element," an anagrammatic tribute to this masterful man and deep thinker. It's the one official note of thanks to Coleman on this album, but his influence resonates throughout.

When Curtis hits the center of this project, he starts directly cutting and swiping against cultural issues on the profound "Requiem For False Equivalence" and the gear-shifting "Fallacy Of Ancient Wisdom." Both numbers serve as recognition of his individuality and indictments against societal leanings. Less topical is "Smash," where the leader tangles and tears it up with Lawrence and Blake; "Song Of The Whales," a moving Charlie Haden gem; "The Nearest," a chorale that comes to support Whitfield's work; and "The Choices We Make," a pseudo-bop stop along this absorbing path. Then band meets finish line with "Path Of Totality," a number inspired by 2017's total solar eclipse and given to a sense of gravity in tone.

The charms of this music aren't so much connected to any individual's worth, strong as these players may be, but rather, what these men accomplish together. This music leaves little doubt as to the power of brotherhood.

Brothers; A Place Of Our Own; Tried In The Court Of Public Opinion; On The Other Side Of Time; Cartoon Element; Requiem For False Equivalence; Fallacy Of Ancient Wisdom; Smash; Song For The Whales; The Nearest; The Choices We Make; Path Of Totality.