Tab Benoit: Brother to the Blues 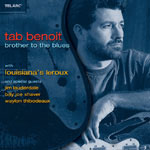 Roots music comes in several flavors. Some enthusiasts look to early Mississippi Delta roots blues, others the music of W.C. Handy. They have a lot in common. Some look to rock & roll, and others, like Tab Benoit, look to country & western music for their blues roots. It all comes together when you look back far enough.

Blues pioneers Robert Johnson, Tommy Johnson, Son House, Skip James and Charley Patton all shared a little from the country & western music of their day, and Tab Benoit feels the same way about it. Benoit sings pure country on Brother to the Blues. The title track features his pedal steel guitar along with a heart-wrenching vocal. Fiddler Waylon Thibodeaux adds more country color to the pure and simple anthem.

I Heard That Lonesome Whistle lets Benoit get every country nuance from his voice. The slow and pokey country anthem pours forth a blue emotional lament. Benoit's clear singing and natural guitar technique lend themselves to pure country music when his baritone voice opens up and he releases all of its emotional power.

His usual delivery on the rockers "If You Love Me Like You Say, "Why Are People Like That? and "So High closes up those vocal apertures for his distinctive vocal timbre, reminding us of the voice we recognize from his previous albums.

Jim Lauderdale sings Moon Coming Over the Hill with a backwoods sentiment that features plenty of strummin' and pickin'. Billy Joe Shaver sings Comin' On Strong with a clarion country flavor alongside Benoit's pedal steel guitar. Benoit paints a lovely tribute session to country & western music on Brother to the Blues that's sure to appeal to a broad audience.

Pack It Up; Bring It On Home to Me; Brother to the Blues; Why Are People Like That?; I