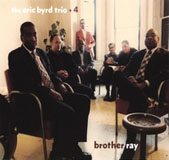 Pianist/vocalist Eric Byrd leads a busy musical life with his group, working out of the Washington, D.C. area and representing the United States as a jazz ambassador at The Kennedy Center, as well as in South and Central American nations.

With the release of Maceo Parker's tribute to Ray Charles Roots and Grooves (Heads Up, 2007) one would wonder just how much closer anyone could get to replicating the spirit of Charles. Parker not only plays but sings in a vital manner that is very close the late Charles' persona.

Byrd has several things working for him. His trio is augmented by four horns in order to duplicate Charles' classic Atlantic sound during the 1950s; and Byrd, himself, provides the arrangements that are an essential part of this album. Beginning with the classic Theard/Moore tune, "Let the Good Times Roll," which first became a signatory tune for Louis Jordan and then in 1960 for Charles, Byrd uses it as a springboard to establish the rollicking groove, and to introduce the horns by having each take a brief solo. Tenor saxophonist Paul Carr, signaled out on his own Musically Yours (PCJE, 2008), provides a wonderfully distilled solo. In addition, trumpeter Brad Clements, altoist Lyle Link and baritone saxman Chris Watling do more than a fair job of conjuring up the spirit of David "Fathead" Newman, Hank Crawford, Marcus Belgrave and Leroy Cooper. Link's simpatico flute work on a few tunes is strongly redolent of "Fathead.."

As a pianist, Byrd is quite effective in this setting. On the mid-tempo "Them That Got," from the Charles songbook, and Alfred's "I've Got News for You," Byrd nails the blues accompaniment, giving the impression that Junior Mance or Ray Bryamt had sneaked into the studio.

As a vocalist, Byrd is an entirely different matter. While Maceo Parker emulates Ray Charles to a tee, Byrd is not an impressionist. His vocal range is naturally higher and his delivery is that of a sweet albeit very soulful vocalist. Yet when he sings Titus Turner's "Get on the Right Track Baby," a vintage mid-1950s Charles staple (and one that has rarely been included on Charles tributes), his vocal is perfect for the setting.

On other tunes like Joe Greene's "Don't Let the Sun Catch You Crying" and Warfield/Williams' "Baby Won't You Please Come Home," the vocal is effective but in no way specifically linked to any Ray Charles version. For the classic Johnny Mercer song, "Baby, It's Cold Outside," Byrd's duet with Lea Gilmore misses the sugar and vinegar style of Betty Carter and Ray Charles, though on any other album, it would be fine. Gilmore is also featured on the lesser-known "Watch Them Dogs," a full-tilt Charles presentation.

Let The Good Times Roll; Them That Got; Come Rain Or Come Shine; I've Got News For You; Get On The Right Track Baby; Baby It's Cold Outside; Don't Let The Sun Catch You Crying; I Want A Little Girl; Watch Them Dogs; Baby Won't You Please Come Home; You Don't Know Me.