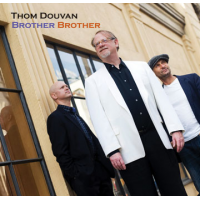 If it was going on sincerity alone it would be hard to knock Brother, Brother. Taken as a labor of love from guitarist Thom Douvan to the classic soul musicians collectively known as The Funk Brothers it sincerely tries hard, but unfortunately comes up short.

The immediate problem with any an album of cover songs are most remakes can't help but pale in comparison to the original, so if you're going go down the well-trod path of playing favorites, you had better bring something new to the party. Douvan falls short on this end as he produces and arranges a session without surprises.

"What's Going On" has been a ubiquitous hit since Marvin Gaye cut it 43 years ago. It has been covered by jazz artists as diverse as Quincy Jones, Herbie Mann, Donny Hathaway, Weather Report, the Dirty Dozen Brass Band and Chaka Khan who performed the tune with The Funk Brothers in the film, Standing In the Shadows of Motown. It's a great song, but it's been done to death. The Gaye discography is loaded with terrific tunes waiting to be rediscovered, but somebody else will have to do it because Douvan must have thought the world needed yet another version.

It would be nearly impossible for Douvan to improve on instantly recognizable classics like "That's the Way of the World" or "Isn't She Lovely?" so the next best thing would be to go all out and interpret them with a bold and fresh approach, but Douvan chooses to play straight down the middle with few twists, not many turns, and no curves. Where the songs should get sweaty, nasty and funky, it determinedly stays polite and well-mannered and unsatisfying.

Jazz without risk is only instrumental music and on that level Brother Brother is okay, but never goes beyond merely being "okay." The cliche is "familiarity breeds contempt." There's familiarity here, but Douvan needs more attempt.

Harvest For the World; That’s the Way of the World; For the Love of You; Anniversary; Ain’t Nobody; You’re Welcome, Stop On By; What’s Going On; Sara Smile; Isn’t She Lovely; So Amazing; With You I’m Born Again; What You Won’t Do For Love; The Water Is Wide; Someday We’ll All Be Free; If I Ain’t Got You