By MATTHEW WARNOCK
April 19, 2009
Sign in to view read count 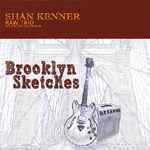 Brooklyn Sketches is a genre-bending, highly energetic album by New York-based guitarist Shan Kenner. Kenner's modern approach to improvising and his constant need to explore new realms of dissonance and rhythmic tension provide for some very interesting moments on the record. Not to be outdone, the rhythm section of Ryan Berg on bass and Rudy Royston on drums prove to be a dynamic pair in both solo and ensemble settings. Both of these talented musicians are equally comfortable when pushing Kenner to new improvisational heights with their comping as they are creating improvised solos of their own. All of these factors, along with a high level of musicianship, combine to create a recording that is both sonically compelling and intellectually stimulating.

The tunes on the album were all written by Kenner with the exception of Chick Corea's "Windows" and Miles Davis' "Blue in Green." The arrangements tend to be very loose, in a good way, including "The Bulldog," which blurs the lines between pre-written and spontaneous composition. As well, the title track mixes elements of Western art music with modern jazz to produce an engaging and sophisticated sound painting of the New York borough. The openness of the form and feel of each tune allows an intimate look into each player's musical persona throughout the album, drawing attention to their individual voices as well as the group dynamic as a whole.

Kenner's playing is difficult to categorize, as he is constantly drawing from a wide variety of influences in his improvisations. There is certainly an element of the freedom of late period John Coltrane and early Ornette Coleman in Kenner's approach to time and feel. His lines are not built from the usual 8th and 16th note rhythms that most traditional players favor in their solos and melodic interpretations. Instead, Kenner prefers to build his melodic and harmonic ideas with groups of five and seven notes, as well as oddly placed triplet figures that push around the bar line. These unusual groupings of notes create an atmosphere where the tempo is constantly fluctuating, bringing an almost malleable feel to the time. This provides for a sense of rhythm that is rooted less in bar lines and constant note patterns, and more in the ebb and flow of the ensemble as a whole.

Kenner is constantly striving to break new ground with his use of abstract rhythms and complex harmonic and melodic ideas throughout Brooklyn Sketches. Though this is a formidable task for any musician, Kenner and his trio rely on their strong musicianship and group dynamic to breathe new life into the jazz guitar trio genre, all the while maintaining an emotional connection to the music.