By EYAL HAREUVENI
August 26, 2007
Sign in to view read count 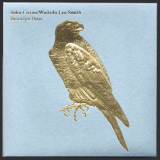 John Coxon of the British drum n' bass duo Spring Heel Jack first collaborated with American trumpeter and composer Wadada Leo Smith on the duo's last and most challenging and fully realized effort, The Sweetness of The Water (Thirsty Ear, 2004). This release was recorded a year later in Brooklyn by John Zorn collaborator Jamie Saft.

But whereas The Sweetness of the Water was a beautiful showcase of an emphatic and conversational meeting between Smith and another master improviser, British sax great Evan Parker (as well as the forward thinking rhythm section of drummer Marc Sanders and bassist John Edwards), with Coxon and his Spring Heel Jack partner Ashley Wales pushing these unhurried soundscapes to the edge and mutating them with clever and modest use of electronics, here Coxon faces a greater challenge.

Smith is a non-confrontational partner, as his latest series of recorded collaborations with reedist Anthony Braxton and percussionists Adam Rudolph and Günter Baby Sommer reveal, but he is at his best with improvisers with a similar willingness for abstraction and definite compositional capability. His seemingly free improvisations with Braxton on Organic Resonance and Saturn, Conjunct the Grand Canyon in Sweet Embrace (Pi Recordings, 2003 and 2004) and Sommer on Wisdom in Time (Intakt, 2007) succeed to crystallize some of the improvisations into well reasoned suites. On this release, it is clear that Smith navigates the musical summit while Coxon supplies and adds textures and colors, contrasting Smith's improvisations.

Some of these improvisations indeed suggest bold ideas, like the flirt with Japanese folk elements on the opening track "Gagaku: Rain," or the intuitive and spare duet of "Urban Air Voices," the most successful piece on the album, in which Coxon's twelve string acoustic guitar offers some country blues orientation. On other duets, such as "November Flowers," Coxon uses electric guitars to add different rough colors, but the interaction between him and Smith is not as open and inventive as on the aforementioned "Urban Air Voices." When Coxon plays the harmonica on "Colours and Waves," "Blood Moon" and the closing "Seven Gates," the gap between these daring musicians widens further. The sophistication of the musical language of Smith, even in its most modest expressions, is far richer than even the most articulate harmonica player can achieve, and such duets only stress the difference between the musical experiences of Smith and Coxon.

True to the provocative manner of Spring Heel Jack recordings, this set of duos suggest a further chapter in a series of adventurous and daring sonic explorations.