By BUDD KOPMAN
September 12, 2006
Sign in to view read count 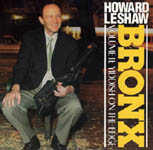 Howard Leshaw is not only the swinging jazz master of the delightful Shadow Song, he is also a klezmer master. Yiddish On The Edge is the followup release to the more traditional Yiddish, which is closer to what is customarily thought of as klezmer.

If you hail from Tulsa or Boise or Reykjavik, you might (probably) not fully appreciate the full meaning of what it meant to grow up in the Bronx in the '50s, but Leshaw's childhood neighborhood is part of him, as is this music.

This second release takes traditional klezmer and jazzes it up in various ways, possibly shocking traditionalists along the way. Playing two types of flute, clarinet and two saxophones, Leshaw, along with a crack band, leads us through eleven tracks from all across the spectrum of klezmer purity.

Starting of with the traditional in the "Doina" medley and the various dance rhythms and tempos involved in klezmer, Leshaw moves to the Fiddler On The Roof-esque "Tanz Yiddach." After that, however, we hear a straight rendition of the Largo (which is in a minor key) from the Vivaldi Piccolo Concerto In C Major, segued to by a drum solo to "Roumanian," which now sounds like the former's first cousin—great fun.

"Yiddishe Mama" is introduced by a sax solo which is played with all of the late night smoke of "'Round Midnight," and Wendy Kimball sings the vocal with every possible bit of drama and pathos. However, "Oy" is given a very hot Latin rhythm, complete with voices in close harmony and a cool guitar solo. At the opposite end of the spectrum sits "Sim Shalom," which is introduced by what almost sounds like Gregorian chant.

The point here is that, as Leshaw says, "klezmer was to its originators what Be-Bop is to the players of today." He and his band take klezmer's musical and cultural ethos and combine it the energy of today. This attitude is truly infectious, and it is almost impossible to keep from humming along with this record.