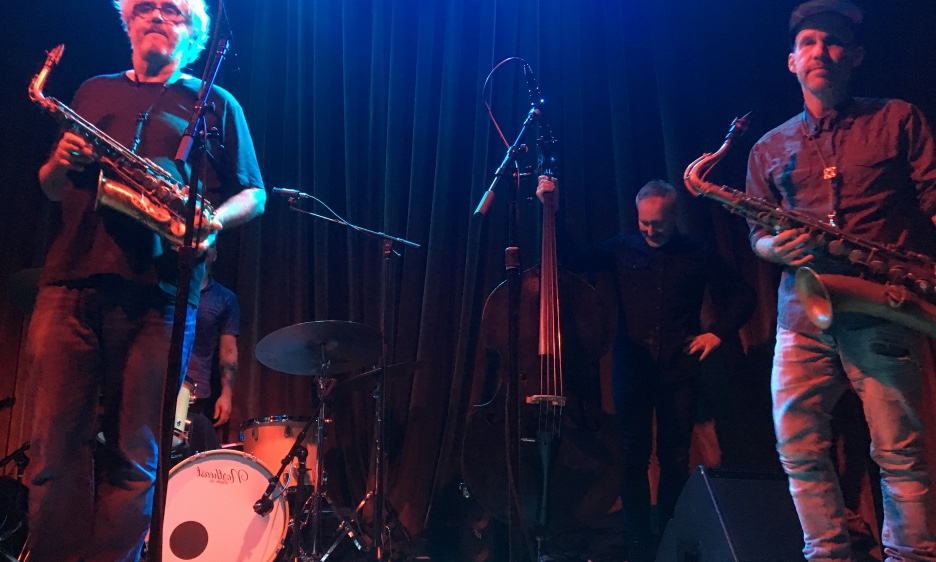 Supergroup Broken Shadows hit Icehouse in Minneapolis Monday, June 18, 2018, paying dues and offering interpretations of music by their heroes and mentors. The NY-based band consists of Tim Berne on alto saxophone, Chris Speed on tenor, Reid Anderson on bass, Dave King on drums and showcases the music of Ornette Coleman, Julius Hemphill, Dewey Redman, and Charlie Haden. While the music of the distinct composers was juxtaposed, it was made cohesive by the cooperation of the performers. To the audience's apparent delight, the set was heavy on Coleman's tunes. Opening with "Humpty Dumpty," Broken Shadows immediately set a lively tone for the packed room, the four musicians branding their own flourishes on the song. Berne and Speed blew the rolling melody in unison, before hometown heroes Anderson and King joined in, acting as the spry rhythm section they play expertly. The band made no secret of their contrasting horn players, whose company can be heard on numerous records, namely those of their '90s band Bloodcount. Berne's shrill and punchy playing sounded almost like a different language compared to the warmth that encompassed Speed's thoughtful lines. But the discrepancy didn't detract at all from the performance, their respective solos providing disparate readings of the tunes of whose authors they were paying homage.

Anderson, (perhaps the band's most unsung member, despite his impressive resumé), played like he meant it, subtly stealing the show more often than not. His work on Haden's "Song for Ché" was a remarkable moment of the evening, his unmistakable tone and robusticity prevailing. While Anderson held them down, King fastened his exuberant grooves to the tunes wherever he could. Though at times his playing overpowered his horn section, King shone on songs like Coleman's "Una Muy Bonita," masterfully grooving away. Another highlight of the evening was a Chris Speed solo that only King underscored, matching the alto's timing and emotion wonderfully. The saxophonist and drummer seemed nothing short of connected at the brain for about a minute.

The quartet has an album in the can that will be "coming out in March," according to Berne, whose deadpan stage banter MC'd the evening. He joked that he used the term "coming out" loosely, as the album will span six LPs and cost $7,000. The joke, however, added to the band's concept, perhaps comparing the inaccessibility of vinyl records in a modern age to the group's tribute to composers of a bygone era. Or perhaps Berne was merely being facetious... But regardless of whether we'll get to hear a Broken Shadows album in March, the band has already given us something to listen to. Whether it's the discovery of Julius Hemphill's Dogon A.D. LP from 1972 or a revisiting of Ornette's legendary This Is Our Music, there's always something to gain from listening, and there's always room for a new take on an old tune.