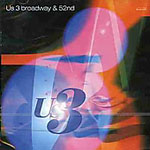 It's hard to imagine a more hallowed jazz address than broadway & 52nd , the site of the original Birdland.

In 1993, British underground DJ turned hip-hop producer Geoff Wilkinson shook up the jazz world with Hand On The Torch, a collection of hip-hop and rap tunes based on samples from classic Blue Note recordings, not only with the label's blessing, but released by Blue Note. "Cantaloop (Flip Fantasia)" went top ten, and exposed Herbie Hancock's "Cantaloupe Island" to an entirely new, for the most part young and urban, audience. Torch also included samples of funky Blue Note jams by Grant Green, Big John Patton, Lou Donaldson, Horace Silver, Art Blakey and Thelonious Monk, albeit as hip-hop rhythm beds for solos by studio musicians and the lyrical rappers.

"The Wall Street Journal" called Us3's debut "the best extended marriage of jazz and rap to date". Torch helped ignite the "what is jazz" debate anew; it was strongly influenced by jazz, or perhaps more accurately, it used jazz. But a lot of people seemed to feel that it wasn't really jazz. Jazz or not, Torch became Blue Note's best-selling jazz album ever. Ever.

On broadway & 52nd, Wilkinson returns sans original partner Mel Simpson, with new rappers (KCB and Shabaam), and with many less samples but many more musicians: trombonist Dennis Rollins, guitarist Tony Remy and saxophonists Steve Williamson and Ed Jones return from Torch, with new additions saxophonist Mike Williams, melodica player Jonathon Gee, and keyboardists Tim Vine and Gareth Williams. There are only three credited samples, including Horace Silver's "Sayonara Blues" in "Caught Up In A Struggle," and Wayne Shorter's "Indian Song" in "Snakes". "I've gone deeper into Blue Note's back catalog to open a point of access for jazz for people who might not know where to start on their own," he explains. "I've used more obscure tunes to try to push people further into it."

broadway & 52nd sounds like the logical next step from Torch ; in fact, the funky first single "Come On Everybody (Get Down)" sounds a little TOO much like a simple second helping of "Cantaloop." "Nowadays" lazily bumps along, nudged by the swivel-hipped sound of Rollins' trombone (sputtering and swerving like Fred Wesley and the JBs after way too much wine); "Grand Groove" is precisely that, a hot rhythmic rack, from which hangs Gherardo Catanzaro's tasty piano, but little else of musical consequence. "I Want Your Body" is a muscular yet supple workout, appropriate for either the dancefloor or the bedroom (or both).

Does it really matter to you if "I Want Your Body" is smooth, genuinely first-rate R'n'B but not jazz; certainly jazz-based, but not jazz at all? How much does it matter to you if broadway & 52nd is good music, but not necessarily jazz? Those are the questions raised by Us3, questions that you're not going to be able to answer by either writing or reading a review of this CD, questions that you're going to have to answer for yourself.