By STUART BROOMER
December 9, 2008
Sign in to view read count 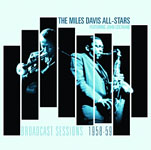 Jazz has been shaped in large part by a few great bands; few, however, would challenge the late '50s Miles Davis bands for collective achievement and sheer brilliance and influence at each instrument, with Davis, John Coltrane (tenor), Red Garland (piano), Paul Chambers (bass) and Philly Joe Jones (drums). It was an extraordinary collocation of the raw and refined, the exploratory and decorative, the hesitant and explosive, sometimes within a single piece. Even the early alterations were remarkable, whether it was Bill Evans replacing Garland or the addition of Cannonball Adderley.

This CD consists of live performances between May 1958 and January 1959, the period between Milestones (Columbia, 1958) and Kind of Blue (Columbia, 1959). Varying editions of the quintet and sextet dig into core repertoire like "Four," "Walkin'" and "Bye Bye Blackbird," with generally good sound quality. The best moments are often Coltrane's; he was at the first summit of his mature playing and is particularly intense on the extended "Bags' Groove," contrasting with the blues-drenched Adderley. This music has appeared before on labels like Chakra and Jazz Door, with everything appearing on Jazz Band as Miles Davis All-Stars Live in 1958-59 featuring John Coltrane. The opening Cafe Bohemia material was also included in the box set The Legendary Prestige Quintet Sessions (Prestige, 2006), a good complement to the period Columbia recordings from Newport and the Plaza.

ADVERTISEMENT
A word of clarification: there's a 12-minute version of "What Is This Thing Called Love" included, a jam session that was televised on Art Ford's Jazz Party. The notes claim Davis, Garland and Adderley are joined by Gerry Mulligan with Nat Adderley on cornet and three drummers (including Candido). The original producers likely misunderstood a concert announcement as a personnel list. It's identified in Tom Lord's Jazz Discography as a Mulligan band with Art Farmer and Gigi Gryce. Given that the trumpeter's intonation and rhythmic attack are unlike Davis' (and the alto player doesn't sound like Adderley), Davis probably isn't here at all.