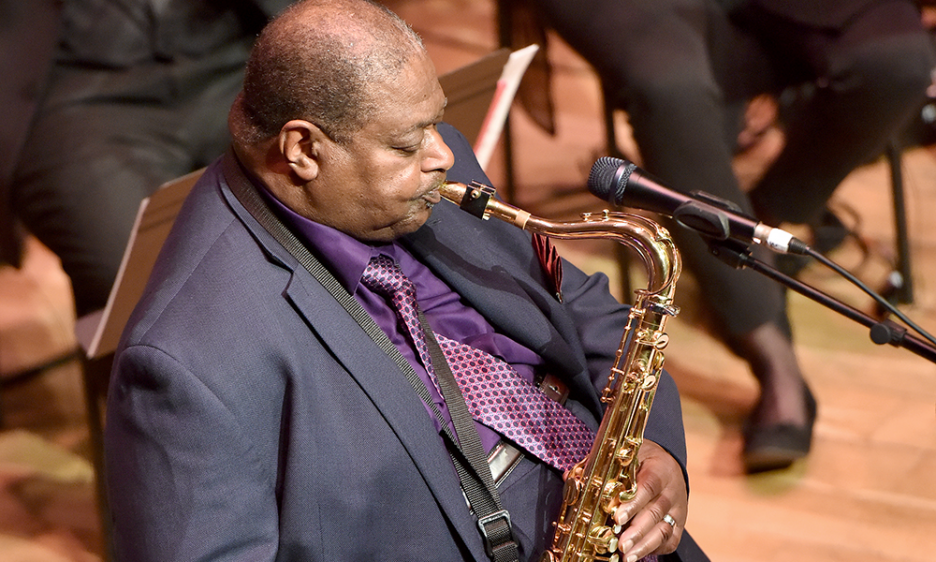 Pee Wee Ellis is an alternative spelling of 'funk' for many people, but on the last night of Bristol International Jazz and Blues Festival, we got a reminder of his roots deep in jazz. In the full to capacity St. George's in Bristol, a one-time chapel now converted to a concert hall, Ellis delivered a set of the choicest standards with a flawless band and horn section augmented by a lush string section. It was the kind of gig that has become one of the hall-marks of this fast maturing festival, now in its seventh year; a specially created event for the festival, in this case a never-before-seen, moment of magic: Pee Wee with strings.

Another hall-mark of this festival is the diverse strands of the programme. We could almost here a 'let proceedings begin' gong sounding across Bristol at 7.30 on the Friday evening as three gigs kicked off the festival. In the main hub for this year, the University Student's Union in the Clifton area, two stages saw British rock and jazz legends Soft Machine on one and bluesy singer-songwriter Elles Bailey on the other.

Down the road at St. George's, Richard Galliano and his New Jazz Musette quartet spun another thread. They launched into "Spleen," an old Galliano composition that segued into a scintillating rendition of "Bebê" by Brazilian master Hermeto Pascoal -a quick 'we can do anything' reminder, before the focus returned to the accordion master's vital and jazz drenched interpretation of the dancing, swirling cadences of the French Musette style. A solo episode had Galliano sounding, appropriately for the space, like a church organ, tossing in a bit of Bach fugue for good measure. The band returned with an affecting jazz waltz, guitarist Jean-Marie Ecay crafting a lyrical and fluid solo before they closed on an urgently throbbing rock-tinged work out, almost as if nodding to the final cadences from Soft Machine's set just up the road.

Friday night concluded with a soul-fueled, grooving set from Hannah Williams, Bristol based but back from a year of international touring and global recognition after their "Late Nights & Heartbreak" was famously sampled by Jay Z. This festival likes a party.

Saturday afternoon kicked off in the smaller Winston Theatre, with pianist and keyboardist Rebecca Nash's Atlas and a set centering on a commission for the festival. The suite of six pieces, inspired by chemical elements, followed a mix of atmospheric electronic washes and deeply grooving pulses with a shapely ballad, and a more crunching, distorted riff with a rocky edge, alto player John O'Gallagher delivering a typically fiery solo of astringent, spiraling lines.

Meanwhile, overlapping down in St. George's, pianists Kit Downes and Matthew Bourne met across two Steinways for an improvised joining of musical minds. They had their wits about them and produced spontaneously choreographed fireworks. A melting, slippery tone-row from Bourne blew up into a rippling storm that ebbed and flowed between the pianos, before blowing itself out suddenly as apparent telepathic communication brought them to a sudden stop. There was calm after the storm, and still more thunder as fists and elbows pummeled the keys, but it was all shaped and re-worked in the moment. Their left-field excursion for the programme produced one of its most riveting episodes.

Back in the Winston Theatre Ant Law's quartet played a set of his often intricate, twisting themes with a fine band that played with zest. Law's playing is considered and fluid, finding a perfect foil in long time associate, Mike Chillingworth on saxophone. They were followed by Julian Siegel's Quartet who proceeded to blow the doors off. With Liam Noble on piano, Ollie Hayhurst on bass and the simmering volcano Gene Calderazzo on drums, they were bursting with energy, listening and playing with an intensity that was electrifying. Exploring Siegel's compositions, they spanned the globe, musically speaking.. A demented samba, Siegal's long declamatory phrases giving way to frenzied flights, turned out to be "I want to go to Brazil." Cedar Walton's "Ugetsu" got the full burn-up treatment. These are all prodigious improvisers, Noble's imagination constantly surprised and delighted and was simply explosive on "Un Poco Loco." Theirs was another stand-out set of the weekend.

Later in the evening, Yazz Ahmed's band demonstrated why her star has risen so sharply in the last few years, drawing on her Bahraini heritage with pieces based on its songs or drumming, in what was a very personal and evocative set. Drummer Martin France was a restless dynamic force all evening. Ahmed's effortless grace with trumpet and flugel horn floated finely spun lines over the pulsating rhythms, electronics providing a bit of grit and distortion

Johnny Mansfield's eleven-piece Elftet surely had one of the youngest average ages of the festival. Mansfield combined exuberance with a rich imagination and skill, writing and arranging for the multiplicity of available textures. There were moments of beauty and drama, the dense weaving of rhythm and harmony making full use of the 11-piece line-up's possibilities. Mansfield's name is sure to spread far and wide on this showing.

The special event strand of the festival celebrated the anniversaries of two iconic albums over the weekend by lovingly recreating them. First, Lady in Satin with China Moses paying tribute to Billie Holiday, then local trumpeter Andy Hague led a sextet playing Kind of Blue before we got to that finale in St. George's with Pee Wee Ellis and his sumptuous reading of a hat full of standards.

Bristol's festival is carving out a distinctive and growing niche in the international calendar.