Led Bib: Bring Your Own

By BRUCE LINDSAY
January 21, 2011
Sign in to view read count 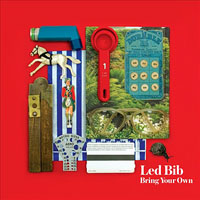 Led Bib has never been an easy ensemble to pigeonhole: according to critics and reviewers the band is "punk jazz," free improvisation, avant-garde, skronk, dirty jazz—and, most splendidly, "death-jazz-cum-math-punk." On the evidence of the London-based band's fourth album, Bring Your Own, it's all of the above, and a little bit more. This is music for dancing, for head-banging, for thinking and even for quiet reflection.

Led Bib's founder and main writer is New Jersey native Mark Holub, a drummer who counts John Zorn, Ornette Coleman and the Velvet Underground as inspirations. While the band never quite travels to the edges of the musical universe which Zorn can at times inhabit, it's perfectly capable of delivering meaty sonic barrages as well as moments of genuine grace.

There are plenty of hard-hitting, riff-laden, tunes on offer, ably justifying the punk jazz epithet, but that's not all. While the immediate impact of tunes such as "Is That a Woodblock" and "Engine Room" neatly showcases this part of the Led Bib aesthetic, "Walnuts" is lighter and rather humorous, while "Winter" slips and slides in a curiously snake-like fashion.

"Little X," by altoist Chris Williams, represents another side to Led Bib: a darker and more mysterious side that takes a bit longer to explore and discover, but as a result, is perhaps the more rewarding. This aspect of Led Bib's approach has some things in common with prog-rock doom-mongers Van der Graaf Generator—disconcerting, but also exciting and fun at the same time. "Power Walking" is in a similar vein—Toby McLaren's inventive Fender Rhodes playing, a key element of the Led Bib sound, takes center-stage for much of the tune.

Bassist Liran Donin is markedly to the fore across Bring Your Own. His fat, rich, electric bass tones are central to the success of the rockier numbers, while his straightforward walking bass intro to Williams' "Shapes & Sizes" shifts smoothly into a heavier sound that perfectly underpins the wailing saxophones of Williams and Pete Grogan. Donin is also the central player on the album's most outstanding tune, "Hollow Ponds." This is a brief but delightful slice of Led Bib's more romantic side—Donin's acoustic bass playing is exquisite, with an Americana-like feel, while Holub creates some of his most inventive and subtle drumming.

Eight years and five albums since its formation, Bring Your Own re-affirms Led Bib's place as one of the most inventive and enjoyable of British jazz bands. This is a band that sounds full of enthusiasm, full of ideas, and always ready to surprise and excite.