By DAN MCCLENAGHAN
March 13, 2016
Sign in to view read count 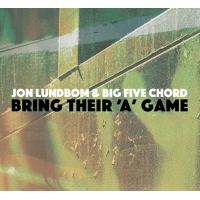 Bring Their 'A'Game is an EP release, download only (for now), from the fertile musical imagination of guitarist Jon Lundbom & Big Five Chord. It is the second in a four part set—following Make Magic Happen. Lundbom's plan is to release four of these download EPs in 2016, then collect them into a four disc box set to sell in the physical copy form near year's end.

The three tunes on Bring Their 'A' Game cover the same territory as Make Magic Happen with a slighty more tamed sound. You could call this one the 'W' disc. The tunes: "Worth," "Wrapped," and "W.R.U." It's a mix a free jazz and and tight grooves, as music that blends the moods of surf rock with Bluesman Big Joe Turner's backing band on the opener, "Wrapped," before rolling into "Worth," a tune that gives off an Art Ensemble of Chicago vibe with its floating rhythm and squabbling saxophones.

As it did on the first disc in the set, the group covers Ornette Coleman, this time on the free jazz pioneer's "W.R.U," that originally appeared on 1962's Ornette! (Atlantic Records, 1961). The tune opens unison horns leading into an extended trio segment—sax/bass/drums—that brings Coleman's 1966 Blue Note Records sets, Ornette Coleman: Live at the Golden Circle, Vol. 1 & 2 (1965). Balto Exclamationpoint begins his tenor solo in tight, Ornette On Tenor (Atlantic Records, 1962) mode, before he shifts into a honking and squawking mood, followed by a "dual solo" by guitarist Lundbom and saxophonist Jon Irabagon, who create a dense weave of sounds as they work toward a fierce abandon.

The music is satisfyingly elemental: bass, guitar, drums and a couple of free flying saxophonists. No pretense here. Rock solid sounds out of the American jazz/rock/blues/free jazz tradition, from a fearless group of music-makers.