By DOUG COLLETTE
October 2, 2011
Sign in to view read count 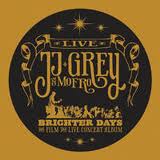 Anyone who's seen JJ Grey and Mofro since 2008 knows how the sparks that fly from their studio recordings catch fire when the band plays live. The audio component of Brighter Days, a combination CD and DVD set, proceeds almost breathlessly as the successive cuts appear at an ardent pace.

Recorded in a single night early in 2011, the performance contains three extra numbers on video, but the sequencing of the audio, like the band's last release, Georgia Warhorse (Alligator, 2010), has a logic all its own that renders it a complete document on its own terms. By the time Grey's ode to desire, "On Fire," is finished, there's no sense of anything being left out.

The set list spans the history of Mofro, which began life as a quirky little unit immersed in the swampy funk of their southern roots through tunes like "Country Ghetto" and "War." Now adorned with horns and fleshed out with keyboards as well as guitars and a rhythm section—drummer Anthony Cole and bassist Todd Smallie (late of The Derek Trucks Band)—this larger unit seethes the same deeply felt soul Grey radiates as a singer and songwriter. The sextet has morphed into a full-fledged soul band.

"Orange Blossoms" marks the point of departure for Grey as bona fide front man for the band. This ode to his Florida roots, set in a geographical context far removed from the provincial character depictions of "Dirtfloorcracker," represents the elevation of Mofro's momentum on stage at The Variety Playhouse in Atlanta, Georgia. Obviously a student of the R&B genre, Grey's fevered personalization of the style distinguishes him from the mere academic admirer or dilettante poser.

The intensity builds over the course of the dozen cuts as J.J. Grey and Mofro contain themselves carefully during the early part of their set in disciplined arrangements like that of "A Woman." Yet even later on, when the ensemble stretches out for "The Sweetest Thing" and "The Sun Is Shining Down," there's a restraint to the playing and singing that precludes self-indulgence. Ultimately, the tighter the band plays, the harder is their impact.

During the spoken word intervals and the occasional warble of harmonica as appears on "Lochloosa," it's clear the band's grasp of dynamics begins with JJ Grey himself. He sounds like a wholly different man than when Mofro first began: the power of his deep voice is just raw enough to remain heartfelt as it ignites the musicians around him to play with a force that matches his own.

The cumulative power of this performance thus turns the brief electric piano interlude from keyboardist Anthony Farrell into a welcome respite of cool from the scaling solo offered by saxophonist Art Edmiston that follows soon after. And the depth to which JJ Grey and Mofro believe in the music they make approaches a religious fervor: Brighter Days, the work of a group spectacularly confident of itself, thus becomes a testament to the transformative power of music.