By GLENN ASTARITA
October 18, 2017
Sign in to view read count 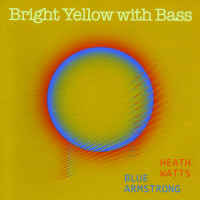 The musicians underscore the tone of this program by citing a quote from renowned artist Wassily Kandinsky: "The sound of colors is so definite that it would be hard to find anyone who would express bright yellow with bass notes or dark lake with treble." But of course, the interpretations are decided by the listening audience, especially since most of these works are steeped in the free-jazz realm.

Heath Watts (soprano sax) and Blue Armstrong (bass) yield a raw, stripped down soundscape via an ongoing sequence of highs, lows, and intricate phrasings. Per the liners, the saxophonist advises that "This music was recorded in the mountains of Montana ... far away from the deep urban canyons of Philadelphia or New York City." Hence, the duo was seemingly relaxed and free of distractions.

And while it may take a bit of stamina to play the album in one continuous listen, the musicians generate popping melodies, Monk-like cadences and numerous movements based on contrasts and realignment mechanisms. Watt also renders plaintive cries amid gritty and animated lines as the duo navigates through a complex strategic initiative, also featuring Armstrong's edgy arco lines and fluid time-keeping.

"On the Outside from Within" is modeled with Watt's breathy notes and the bassist's fragmented parts, leading to a discordant and rather serrated ballad. Whereas, "Non-Standard Issue" features the saxophonist's bristling flurries and Armstrong's contrapuntal articulations. At times, the program translates into a rough and ragged listen, but the duo's creativity wins out as their fertile concepts seed the buoyant flows and energized discourses.

Adhocery; The Other and the Same; Assits; From One Extreme to Unspecified; Every Other One Is Every Bit Other; On the Outside from Within; Moment of Asking; Inverted Commas; Non- Standard Issue; Doubly Singular.