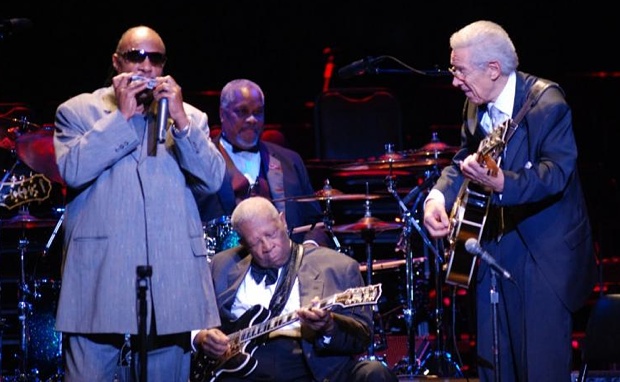 By CHUCK KOTON
February 19, 2012
Sign in to view read count
Southern California's jazz community has taken some brutal hits in the last few years. Too many of the brilliant artists who make the music have passed on, as have the venues they performed in. The Jazz Bakery's shuttering nearly three years ago was a breath- snatching body blow; Charlie Os abrupt closing this past summer stung like an upper cut; and the recent news of music impresario Rocco Somazzi's imminent relocation to the Bay Area floored followers of "out" sounds and emerging jazz musicians. Thankfully, Somazzi is continuing his commitment to the Angel City Jazz Festival, a vital event on LA's music calendar for the last four years.
Yet, a few new clubs have opened their doors and begun presenting compelling music for LA area jazz lovers. And several longstanding musical spaces continue to survive in these arts-challenged times. As the new year dawns, a still vibrant, close-knit jazz scene continues to provide bright moments to celebrate in gratitude.
Barbara Morrison
Musicians 47 Union Hall

Sweet notes and warm tears flowed at the Musicians Local 47 Union Hall birthday benefit for the inimitable diva of jazz and the blues, Barbara Morrison, whose recovery from diabetes-related surgery (leg amputation) has provided the brightest and most poignant moments of the year for the LA jazz community.

The event, hosted by the dapper and knowledgeable jazz DJ, James Janisse, opened with the Frank Capp band. Ably assisted by the muscular tenor sound of George Harper and veteran bassist Richard Simon, Capp drove the rhythm to Charlie Parker's bebop classic, "Confirmation." Next, Capp brought on his big band, the Juggernaut, featuring the sweet tenor sound of Pete Christlieb on "We'll Be Together Again" and Duke Ellington's "I Got It Bad." Legendary vocalist Ernie Andrews, recalling the halcyon days of the big bands on Central Avenue, joined in for a moving interpretation of "You Are So Beautiful To Me." Now in his 80s, Andrews continues to sing and swing with an undiminished joie de vivre that captivates his audiences.

The Phil Ranelin Quintet took the stage and tore right into an up- tempo romp on Oscar Hammerstein's "Softly As In a Morning's Sunrise," with Ranelin and one of L.A.'s rising jazz stars, tenor saxophonist Kamasi Washington, horn- to-horn, urging each other on. The rhythm section was featured on a dreamy "My Romance," with Trevor Ware's steady pulsing bass and Mahesh Balasooriya's pensive piano notes revealing a familiarity with love belied by his relative youth. The band closed it out with a bright and bouncy "How High the Moon."

In addition to his creative musicality, Ranelin's most important contribution has long been his nurturing of a new generation of players like Washington and Balasooriya. It is these cats who will soon become the foundation for the future of jazz.

Happily, Morrison is back to her old sassy self, not only performing again but also running the Barbara Morrison Performing Arts Center. Busy as ever, on this night Morrison needed only to relax and soak up the love from the standing room only crowd of her friends and fans.

The Los Angeles County Museum of Art (LACMA) has been presenting world class jazz concerts free to the public for 20 years and, in spite of the brutal cuts to arts budgets everywhere, it continues to support this invaluable music. On Friday September 16th, a typically spectacular and balmy evening, the Phil Ranelin Ensemble performed for a standing room crowd. Ranelin, the veteran trombonist and jazz jewel of the Los Angeles jazz scene, opened with a fast-paced blues featuring Kamasi Washington. Washington, like many players, clearly had the talent and chops at a young age, but now he plays with the confidence, power and personal style that only comes with experience. His tenor sax nearly combusted as he blew chorus after chorus of sizzling blues.

Ranelin shifted to a more tropical mood with an original composition, "Jamaican Sunrise," from Perseverance (Wide Hive, 2011).The band's island rhythms, especially the cascading waterfall of notes played by the ubiquitous and inspired bass veteran Trevor Ware and pianist Mahesh Balasooriya (another young musician deserving of recognition), had the listeners swaying like palms in the breeze.

The band closed the set with a burner, "Spirit of Dolphy," from Inspiration (Wide Hive, 2004), on which Ranelin paid musical tribute to several of his mentors. Don Littleton opened with a tension-filled drum solo, and then Ware and pianist Balasooriya offered up solemn chords, before the horns added their impassioned voices. Ranelin blew rapid and deep 'bone tones then summoned several elephantine roars followed by Washington's frenzied sax exploration.

Ranelin, who has earned honors from the City of Los Angeles and the California State Senate for his commitment to the community's cultural advancement, energized the multicultural and multi-generational crowd and his ensemble's performance provided ample and tangible evidence for the value of the arts in public life.

Since 1937, UCLA Live has brought the world's greatest performing artists to the Royce Hall stage. That first season's program included such musical luminaries as Duke Ellington, George Gershwin and Marion Anderson, among others. This past September, UCLA Live presented another giant, a tenor titan, in fact, by the name of Sonny Rollins, to a nearly sold out and very enthusiastic audience. 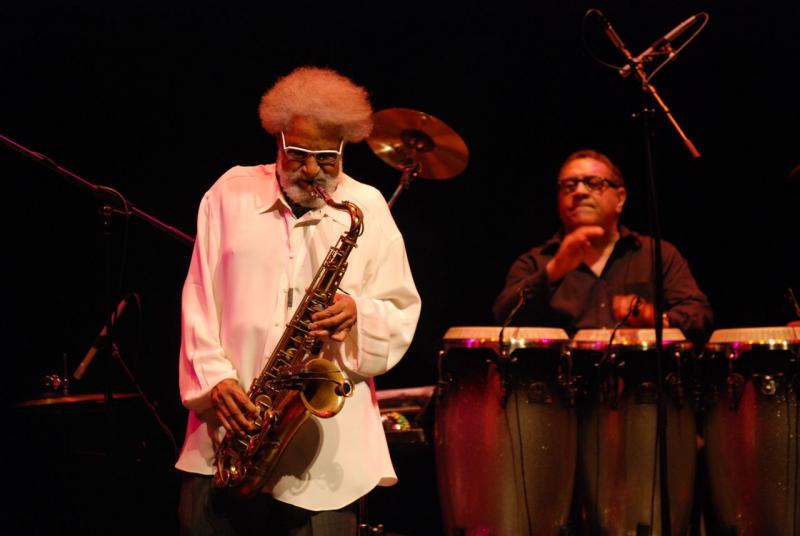 Rollins came out roarin' hard on an up tempo blues. He stalked the stage as he improvised, stopping in front of band mates, guitarist Peter Bernstein, long- time bassist Bob Cranshaw and percussionist Sammy Figueroa, seemingly interrogating and challenging them like some kind of a white haired, swingin' Jazz Inquisitor. Fortunately, they were all up to the task.

On Irving Berlin's "They Say It's Wonderful," Rollins displayed the infinite musical imagination that allows him to play the simplest melody and then transform it into a natural vehicle for his, and the audience's, improvisatory pleasure. Bernstein soloed with his characteristically elegant and impeccable swing, at times recalling the sound of UCLA's resident jazz guitar legend and director of the Jazz Studies program, Kenny Burrell.

No Rollins performance would be complete without a taste of Caribbean flavors in acknowledgement of his familial West Indian roots. Rollins kicked off the calypso, his tenor bobbing and weaving with infectious rhythms. Then conguero Figueroa and drummer Kobie Watkins took the spot light with an extended rhythmic duet.

At 81, Rollins, the recent Kennedy Award-winner, may move more gingerly around the stage, but his quest to create is undiminished. Reveling in his forever youthful spirit, Rollins mesmerized and delighted the audience for ninety minutes, a living testament to the power of music.

The commanding figure of sax master Azar Lawrence brought a packed house full of jazz lovers from all over Southern California to the Seabird Lounge in downtown Long Beach to be captivated by his exalted sounds. And from the very first note, everyone knew they were in for a mystic journey—the title of Lawrence's successful 2010 recording on Furthermore Records.

On McCoy Tyner's "Walk Spirit, Talk Spirit," (which he often performed as a member of the pianist's band), Lawrence, his tenor held high, blew unrelenting chorus after chorus of blues. Pianist Theo Saunders reached deep for a taste of his inner Tyner, matching Lawrence with rich, soul-stirring chords. Then the rhythm section took off on an extended sonic flight. Saunders, along with master bassist Henry Franklin and dynamic, young drummer Tony Austin got into a visceral, hypnotic and sweat-inducing groove to Mother Africa.

On the Heyman-Green standard, "Body and Soul," Lawrence mingled his lush sax sound with the elegant tones of trumpeter Gilbert Castellanos. Taking the first solo, Lawrence authoritatively stated the familiar melody before roaming insistently through the lower depths of his tenor. Next, Castellanos patiently built his solo, beginning with muted blue tones then leaping to a bright crimson climax. The Mexican-born Castellanos, who grew up in a musical family (his father led the Gil Castellanos y Su Copacabana) , heard Freddie Hubbard recordings at an early age and fell in love with jazz. Today, this Berklee and Cal Arts-educated trumpet phenom is an increasingly visible presence on the music scene, whether playing straight-ahead or Latin jazz with his own New Latin Jazz Quintet.

The band closed the set with a languid iteration of "Say It Over and Over," the Jimmy McHugh composition memorably performed by John Coltrane on his Ballads (Impulse!, 1963). Lawrence's romantic nature took over, as his tenor's warm notes—along with Saunders' sensitively stroked ivories—visibly moved the listeners to spontaneous "oohs and ahhs."

Angelenos came out to UCLA's Royce Hall en masse to help jazz guitar legend Kenny Burrell celebrate his 80th birthday. The figurative and literal dean of jazz guitar (he is the founder and director of UCLA's Jazz Studies program) first recorded with Dizzy Gillespie in 1951 and has led over 100 of his own sessions. He began his academic jazz career nearly 35 years ago, when he began teaching the nation's first college level class devoted to his musical idol and mentor, Duke Ellington. Then, in 1996, Burrell became the first director of UCLA's Jazz Studies Department, where he not only teaches the music and its history, but also inspires countless numbers of young people to make jazz an integral part of their lives.

The blues has been at the foundation of jazz and celebrating that intimate musical connection was the "King of the blues" himself, the inimitable B.B. King, who instantly magnified the evening's electrical output. When he tore into "The Thrill Is Gone," the crowd roared ecstatically. But the musical thrills peaked when surprise guest, the great Stevie Wonder, joined Burrell, King and vocal queen Dee Dee Bridgewater onstage. Burrell suggested they "play a blues" and the cats went off. Wonder's harmonica and the two octogenarian guitar masters drove each other to a fiery finish.

The evening's second set featured Burrell's recent project, the LA Jazz Orchestra Unlimited, an organization that Burrell hopes will one day rival New York's Lincoln Center Jazz Orchestra. Although finding sufficient financial support and performing opportunities for such a large group will be challenging, clearly Burrell has the energy to bring his dream to fruition. Later, the LAJOU joined with UCLA Philharmonia to perform Burrell's powerful extended composition, "Suite For Peace."

This 80th birthday tribute was a joyous affair, well-deserved by Burrell whose humanity, generosity of spirit and contributions to jazz may even exceed his unparalleled sense of swing.

Too many empty seats continues to be a problem here in Southern California where the dispersed nature of life translates into long drives to venues scattered over miles of freeways. Club owners face a daunting task trying to fill seats, especially mid-week, but if people want to keep this precious music called jazz alive, they need to fight the inertia and get out and support these musicians in the clubs.