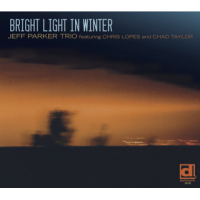 Chicago-based guitarist Jeff Parker has cut his proverbial teeth with the Association for Advancement of Creative Musicians (AACM) and remains an active member of that group. His own work is very much in the spirit of the AACM's musical philosophy, but enhanced by his unique vision that draws from all sources of improvised music including but not limited to jazz.

His third release as a leader, Bright Light in Winter, finds the guitarist in a lean setting with fellow Chicago Underground Orchestra members, drummer Chad Taylor and bassist Chris Lopes, blurring the distinction between composition and improvisation on nine originals by the members of the trio.

The music is generally modal and edgy with the right amount of dissonance to keep things engaging. "Swept Out to Sea," for example, is a minor-key sonata, with Parker logically building on the melody in an almost baroque structure.

All three musicians are masters of utilizing pauses and silent intervals to enhance and punctuate their notes and beats. The calypso "Bright Light Black Site" features Lopes' richly hued strings together with Taylor's lightly percussive cymbals weaving a shell into which Parker pours his sparse and lyrical textures.

The blending of genres is present throughout the album as on the Tzigane-esque "Istvan" that opens with Lopes' rich, horn-like bass solo, buoyed by Parker's occasional and properly timed strumming. Taylor keeps time and creates a hypnotic vamp that adds to the tune's mystery.

These explorations are not limited to world music, but also expand to rock in a couple of fusion pieces. On the quietly balladic "Change," Taylor's rocking percussion is featured, while Parker and Lopes' duet is like a psychedelic dance adorned by the electronic accents.

This sublime and contemplative record is best appreciated when heard from beginning to end in a single sitting; conceptually and harmonically, the tracks bleed into each other, creating a cohesive entity that is much more than just the sum of its parts.