By JOSHUA WEINER
December 4, 2003
Sign in to view read count 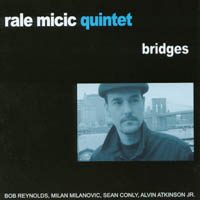 Although jazz is, in several respects, a truly American musical idiom, it has spread to the far reaches of the globe in the modern era. This dissemination has led to the appearance of excellent jazz musicians in unexpected places, and the Serbian-born guitarist Rale Micic (pronounced 'Rah-leh Mee-cheech') is a fine example. His first-rate debut album, Bridges, features seven memorable originals played by his regular quintet, featuring Bob Reynolds on saxophones, Sean Conly on bass, Alvin Atkinson Jr. on drums, and on most tracks, Milan Milanovic on piano.

Micic is a fairly traditional player, favoring a classic clean tone and a smoothly unfolding, melodic solo style. His tunes are, however, harmonically adventurous and the quintet plays them with great conviction and ensemble power. The title track quickly sets the tone with a breezy melody that comes across like a darker-hued Pat Metheny, followed by a calm, almost methodical solo by Micic that shows traces of Jim Hall's influence. The energy level is raised by Reynolds' solo, which builds slowly to an ecstatic climax. Milanovic comes next, beginning with a startling but intriguing "fairyland" intro that gives way to a more typical post-bop exploration. On this tune and several others, Micic plays beautifully, but seems slightly reserved; one often wishes he'd take a cue from his fiery horn player and let loose. Perhaps on their next outing, the group can tackle some standards that will allow the leader to stretch out a bit.

Other standout tracks include the steaming, up-tempo 'Alarm,' capped by a spirited trading of eights; the lovely 'Quiet Wave,' which features Micic on acoustic guitar; and 'Wherever You Go,' a brooding figure in 7/8 which inspires some great interaction between the leader and Reynolds, who hits some Coltrane tones in his soprano solo. Conly and Atkinson are rock-solid throughout, and the recording is clear, muscular, and balanced. With Bridges Rale Micic has delivered a memorable and assured debut album that leaves me looking forward to his next.