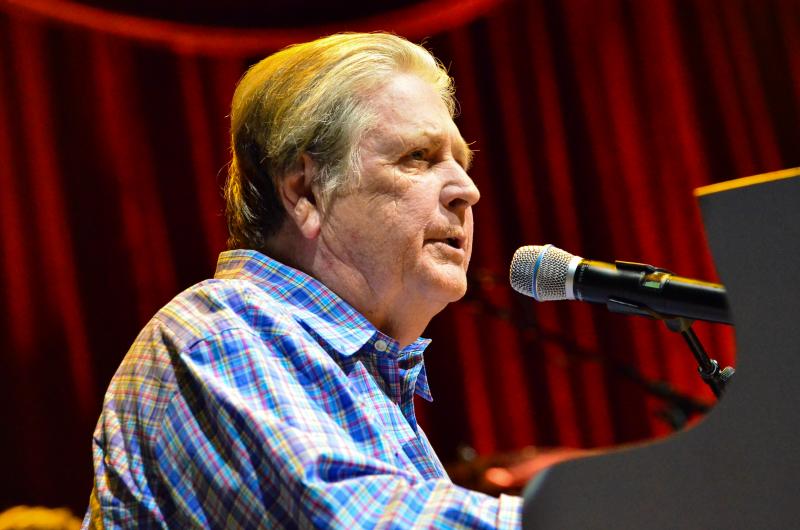 Brian Wilson and Rodriguez are both survivors. Wilson's story is well-known by almost everyone. Rodriguez' story is slightly more murky.

Tortured genius, the primary architect of the California sound and the creative force behind the Beach Boys, Wilson is widely considered to be one of the moist influential songwriters of this or any era. Wilson is the visionary behind The Beach Boys' Pet Sounds album (Capitol Records, 1966), an album that many believe is the greatest album of all time. Pet Sounds' follow-up Smile was cancelled and didn't see an official release until 2004 when Wilson released it as a solo CD on Nonesuch Records. Following the cancellation of the original Smile project, Wilson's mental health deteriorated. He eventually recuperated and began recording and performing as a solo artist. He also occasionally returned to perform and record with the Beach Boys (most notably for the group's 50th anniversary celebration and the That's Why God Made the Radio CD released on Capitol Records in 2012).

Over the course of his legendary career, Wilson has been inducted into the Rock and Roll Hall of Fame (in 1988) and has won numerous Grammy Awards. Earlier in 2015, a biopic of his life (in which he was portrayed by both Paul Dano and John Cusack), Love & Mercy, was released. The film, directed by Bill Pohlad, received critical acclaim, and as of this writing is still playing in theaters. Wilson, himself, has stated that the film is a factual representation of his life.

Rodriguez, was born Sixto Diaz Rodriguez in Detroit, MI on July 10, 1942. He is also known as Jesus Rodriguez. After recording two critically acclaimed, but generally publicly ignored albums in the early 1970s under the name Rodriguez, he faded from view. Though he had a loyal following in Australia, Rodriguez quit his music career and lived in Detroit while working in demolition and on production lines.

For years, Rodriguez was a relatively unknown in the U.S., yet he managed to gain significant airplay in Australia, Botswana, New Zealand, South Africa and Zimbabwe. He became a very influential and beloved artist in those countries. Rodriguez was so successful in Australia that he was brought there twice (in 1979 and in 1981) to perform sold-out concert tours across the country. Though he had performed in Australia, and wasn't a mystery on that continent, South Africa was a different story. In South Africa, the details of his life were unknown. Many fans believed that that he had killed himself on stage in the 1970s. Rodriguez was unaware of his fame outside of Australia until 1997. It wasn't until his daughter came across a South Africa-based website dedicated to him, that the singer learned of his popularity. Eventually his South African fans found and contacted Rodriguez. His career was revived. The story of his rediscovery and rescue from obscurity was told in the documentary Searching for Sugar Man which won the Academy Award for Best Documentary Feature at the 85th Academy Awards in February 2013.

The last day of June 2015 was a muggy Tuesday. On this night at the Nikon at Jones Beach Theater Rodriguez manned the opening slot. He was escorted onto the stage by his daughters and got right down to it. Though he appeared to be in somewhat frail health, he was in fantastic voice. Dressed in dark clothes, sunglasses and a white fedora that sported a black ribbon, the almost 73-year-old singer ran through a robust politically-charged set accompanied by only his 6-string guitar. The set included: "Inner City Blues," "Crucify Your Mind," the Nina Simone Cover "Love Me or Leave Me," "This Is Not a Song, It's An Outburst Or The Establishment Blues," "I Wonder," "You'd Like To Admit It," "Sugar Man," a stunning version of the Jefferson Airplane classic "Somebody to Love," Vic Damone's "On The Street Where You Live" and the Little Willie John tune "Fever."

The strong performance was punctuated with pearls of wisdom. His feelings regarding those who hate was Zen-like ("Hate is too heavy an emotion to waste on someone you don't like. Many of us come in to this life with a clenched fist, but we all leave with an open hand."). He explained that, "If women entered politics, they'd fix it." He also explained the mystery of life ("The secret to life is to keep breathing in and out. The mystery of life is you never know when it's gonna end."). He was also self-deprecating in his humility. When audience members called out their love, Rodriguez responded almost immediately with a humble, "I know it's the drinks, but I love you too." When his set concluded, the crowd rose to its feet and gave the formerly forgotten folk singer a well-deserved standing ovation.

After a short intermission, Brian Wilson, accompanied by eleven other musicians took the stage. Wilson acknowledged his touring partner, Rodriguez by stating, "Rodriguez was great wasn't he!" After the applause had died down, Wilson and his band dove right in and performed a main set that consisted of 27 two to three-minute mini-symphonies.

Wilson was quite talkative. After saluting Rodriguez he announced that the band was "going to start with a prayer I wrote a long time ago—a four-part harmony prayer..." With that, the beautiful harmonies of "Our Prayer" filled the outdoor amphitheater and the performance had begun. "Heroes And Villains" was up next. Wilson was not only in good spirits, he was in good voice. His vocals were strong and they were perfectly augmented by the harmonies provided by his band which included Beach Boys co-founder Al Jardine and one-time Beach Boy Blondie Chaplin.

Wilson and the band brought out some of the summer-defining big guns fairly early. "California Girls," "Shut Down," "Little Deuce Coupe," and "I Get Around" got the mostly middle-aged crowd on its feet and dancing in the aisles. Not letting up, but pacing himself, the 73-year-old Wilson let some of the other band members do the heavy lifting. "This Whole World" (from the Beach Boys' 1970 Brother/Reprise Records release Sunflower) featured Darian Sahanaja on lead vocals. Wilson also gave Al Jardine the spotlight. Jardine's vocals shined on the Crystals' "Then He Kissed Me" and Lead Belly's "Cotton Fields." The ballads "In My Room," "Surfer Girl" and "Don't Worry, Baby" followed. The fact that these ballads followed each other did nothing to slow down the performance. In fact, the audience members remained on their feet, swaying, dancing and singing along with the musicians.

Wilson, then announced that the next song was "a love song I wrote for my wife with the help of Scotty over there." The performance of the song from Wilson's 2015 CD No Pier Pressure (Capitol Records), written with Scott Bennett, was sweet, poignant and beautiful.

Shifting gears, Wilson introduced Blondie Chaplin. Working like a well-oiled machine and playing off of each other, Wilson and Jardine showed a familiarity that can only be achieved by fifty-plus years of friendship. They practically finished each other's sentences. Wilson began Chaplin's introduction by saying, "He was with the Beach Boys in the '70s and then he spent 10 or 12 years working with the Rolling Stones..." Jardine then quipped, "And he's lived to tell about it." Chaplin came forward and sang "Sail Away," with Jardine and Wilson. Following that song, Jardine announced that the next song would "rock you up a bit; you're gonna have to get on your feet and dance a bit." Wilson then jumped in and simply stated "This one is called 'Wild Honey.'" As advertised, the song rocked. Chaplin was then asked what he wanted to sing. He replied, that he'd like to sing "Sail On Sailor." The ensuing performance was a letter-perfect rendition of the 1973 hit from the Beach Boys' Holland album (Brother/Reprise Records).

The evening's concert was truly a Brian Wilson career retrospective. Songs from all facets of his career, with and without the Beach Boys, were performed. Wilson handled a number of the vocal leads and where the song called for a singer with a different register, the band members offered stellar versions of the songs. Darian Sahanaja took the lead vocals for "Darlin'" with Mike Jardine (Al's son) handling the lead vocal duties on "Wouldn't It Be Nice."

The main set came to a close with an amazing grand slam of hits. "Wouldn't It Be Nice" was followed by "Sloop John B" (the traditional Caribbean folk song that was originally released by the Beach Boys on Pet Sounds). Before the next song Wilson took a moment to announce, "This is the best song I ever wrote." The band then eased into "God Only Knows." The statement was far from hyperbole. In 2012, "God Only Knows" was ranked at number 25 in Rolling Stone magazine's "500 Greatest Songs of All Time." Pitchfork Media ranked it as the greatest song of the '60s and The Rock and Roll Hall of Fame included it in its "500 Songs That Shaped Rock and Roll" collection. Following the three Pet Sounds blockbusters "Good Vibrations" brought the set to a close with just about every soul in the venue (young, old, male, female, paying audience members, jaded record company executives, security guards and vendors alike) jumping to his or her feet, bopping to the music and singing along.

The encores were just as joyous—a '60s-era medley of "All Summer Long," "Help Me, Rhonda," "Barbara Ann" and "Surfin' U.S.A." had them dancing and movin' and groovin' to the beat of a simpler time. The five-pack of encores ended when Wilson closed the performance with "Love & Mercy" from his first solo album, 1988's Brian Wilson (Sire/Reprise/Warner Brothers Records). The song also happens to be the title of the Brian Wilson biopic. In a perfect world, the bittersweet, tender, heartfelt song will get a second life and climb the charts, taking its place among Wilson's other classics.

As the happy crowd set forth into the warm summer evening many could be heard singing Beach Boys classics. In the parking lot, as many cars started-up and the radios/CD players came to life, Brian Wilson's legacy could be heard blaring through the speakers.