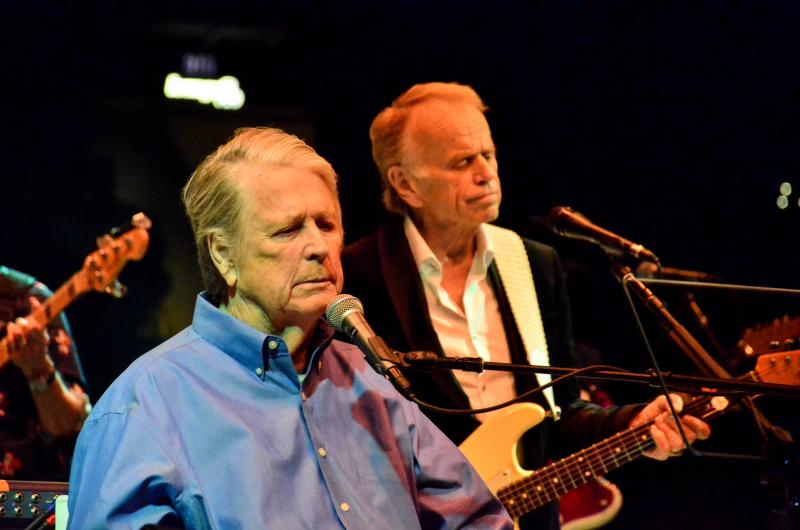 By MIKE PERCIACCANTE
December 16, 2018
Sign in to view read count

If these performances represent Wilson's last full tour, they will go down as a wonderful opportunity to see a musical genius.

Brian Wilson is many things. As one of the most influential songwriters of all time, a founding member and the musical force behind the The Beach Boys, and a Grammy-winning inductee into the Rock and Roll Hall of Fame, his story is well-known.

On a cool early December evening, Wilson and his band touched down at the NYCB Theatre at Westbury for the eagerly awaited Brian Wilson Presents The Christmas Album Live performance. Upon entrance to the intimate venue, many fans were gathered in the lobby discussing Wilson, his legacy, the Beach Boys and what else Wilson might play besides Christmas songs.

The evening began with the Austin-based duo Beat Root Revival, an act specially picked by Wilson to open this tour. Andrea Magee and Ben Jones delivered a short but powerful set that was folksy, bluesy, countrified and rockin.' Magee played the traditional drum of her native Ireland while Engish-born Jones played guitar and programmed loops. Highlights of their set included the original "Sit Me Down Blues" as well as powerful covers of Fleetwood Mac's "Dreams" and The Beatles' "Come Together."

After a short intermission, Wilson and his huge band appeared onstage. Wilson, who had back surgery earlier in 2018, was brought to the stage in a wheelchair. As he settled behind his keyboard, he announced, "Hello Westbury!" His eleven-person band was led by musical director Darian Sahanaja, former Beach Boy Al Jardine and Wilson's son-in-law Rob Bonfiglio. Wilson, Jardine and Blondie Chaplin handled the vocals. The small venue features a revolving stage that somehow fit twelve musicians onto the cramped space. Chaplin sang on about one-third of the Christmas tunes and spent the majority of the evening shuttling between the dressing room and the stage.

Wilson and his band opened the show with "Little Saint Nick," getting right down to an early Christmas celebration for the faithful. They turned back time to the sixties and the the release of their The Beach Boys' Christmas Album (Capitol Records, 1964) with Wilson's versions of holiday classics and his holiday originals. The performances included wonderful versions of "The Man With All The Toys," "Merry Christmas, Baby," "Christmas Day," "We Three Kings," a jazzy "I'll Be Home for Christmas," "Christmasey" and "Winter Symphony."

Though there was only one set, the performance had two separate segments. Chaplin's take on "Run Rudolph Run" finished the holiday portion, followed by the band giving the audience the thrills they hoped to hear: a Beach Boys hit-after-hit closeout. This segment was comprised of only eight songs yet thrilled the crowd.

From the first notes of "Wouldn't It Be Nice," the crowd was on its feet singing and dancing as though this was the last party they'd ever attend. Wilson and his band gave the audience its money's worth with "God Only Knows," "Sloop John B, " "Good Vibrations," "Help Me Rhonda," Barbara Ann" and "Surfin' USA." "Fun, Fun, Fun" sent the fans out of their minds and provided exactly what the song promised. The show ended with a cover of "White Christmas" followed by the traditional "Auld Lang Syne." With that, Wilson waved to the crowd, received a standing ovation, was helped into his wheelchair and was whisked away to the dressing room.

This was a special performance. Wilson is 76-years-old and, due to his recent surgery, doesn't move around easily. If these performances represent Wilson's last full tour, they will go down as a wonderful opportunity to see a musical genius.