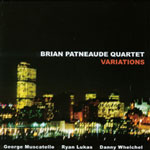 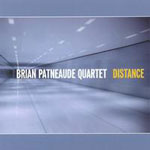 It is easy to see why tenor saxophonist Brian Patneaude and his quartet are so popular and busy. The group is extremely tight and its music is like nothing else. Sounding at various turns exuberant, soaring, grooving, or longing, it leaves you in suspense from one track to the next about what is going to happen. Even within a track, the music is never predictable, and many times the band's total sound can sweep you away.

While Patneaude is the nominal leader of the group, guitarist George Muscatello is always close by to take the lead to a different place. They seem to play off each other musically and timbrally. Patneaude is an extremely full-throated player and there is nothing tentative in his playing; every note has a drive and direction. Muscatello, on the other hand, has chosen to produce a light, ethereal, almost bell-like sound through electronics that floats above and around the proceedings, many times enveloping the band in gossamer shimmers. Both players have the innate ability to build a solo and lead the listener through a process of exploration; there is never a hint of riffing.

And that's not to slight the rhythm section: bassist Ryan Lukas and drummer Danny Welchel provide a very supple and lithe rhythmic feel. The music never lands heavily, and while they do get a chance to solo, their importance is best shown by how they integrate with the front line and work to produce the Patneaude sound. Muscatello composed six of the nine tracks on Variations, and Patneaude two; Distance is comprised entirely of Patneaude compositions.

If I were asked to name a favorite, it would clearly be the earlier Variations. But taken together, these two releases, separated by two years' time, constitute an impressive body of work. Since I heard Distance first, it was my introduction to Patneaude and his quartet. A bit underwhelmed at the outset, I found that the album grew on me, primarily because the tunes were memorable. But then I became aware that the structure of the pieces was much closer to popular music than I was used to, and that the phrases of the saxophone were more vocal, having a singing quality that could be associated with smooth jazz. Don't get me wrong: Distance is emphatically not smooth jazz; the music is much more complex than anything in that genre.

Fortunately, Patneaude also sent me a live CD recorded at the release party for Distance. Quite naturally, the tracks (five of six from Distance) are longer, and the band can stretch out. While the music can be recognized from the studio recording, the feel is entirely different and to use a word, tougher. During the extra minutes, the band moves away from the more obvious structures that had been originally set up and head deeper into the more purely musical side of the original tune. The audience applauded many of the solos, but also introductory sections that set up different parts of the music. This was quite a show, and, as I said earlier, there is no doubt as to why Patneaude's quartet is popular.

I was caught unprepared when I heard Variations. While it obviously features the same group, the music is altogether more abstract. The tunes are less song-like in their melodic and harmonic movement, and hence the role of jazz instrumental solos is much stronger. They're also deeper—the whole atmosphere was more intense with the seeming intent on digging more into the music and expecting more from the listener. On both discs the arrangements, regardless of whether they are by Patneaude alone or the group, have an organic feel and create a sound picture, telling a story with a clear arc. By structuring the music this way, the band can engulf the listener and bring him or her inside, rather than playing the usual head/solo/solo/head formula. This aspect of their music, combined with the creation of a distinctive sound, is what makes the music so attractive.

Some say the third time is the charm. I anxiously await Patneaude's next album to see where these fine musicians will go from here, and what new areas they'll choose to explore.