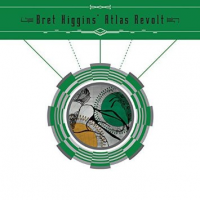 The eponymous debut from Toronto-based bassist Bret Higgins' Atlas Revolt is a tough one to pin down and an easy one to get pleasantly lost in.

Higgins regularly walks through different musical worlds, working with the folk-rock outfit Great Lake Swimmers, the Balkan-klezmer band Beyond The Pale, the folk-ish Ozere, and the trippy avant-klezmer jam band known as Zebrina, so it should come as no surprise that his own music pulls from so many different places. He readily blends Eastern European influences, rock grooves, psychotropic sounds, and klezmer-ish melodies, alternately creating grooving numbers and sweeping, cinematic pieces in the process.

Right off the bat, Higgins walks the klezmer-rock path with the title track. But that doesn't last. He shifts gears from there, turning into a musical nomad who wanders Spanish hills while caravanning with the Romany ("El Metate"). Then he promptly changes directions twice by creating something that sounds like it was pulled from an Ennio Morricone score for a Spaghetti Western ("All About The Starry Sky") and delivering an amped up semi-raver ("Zagazig"). In those first four pieces, Higgins' love of variety is laid out for all to hear.

While Higgins liberally mixes styles and sounds in these original compositions, all of this music manages to speak the same language. That's due, in large part, to these musicians. Each member of this ensemble has a role to play, and each plays it to perfection. Higgins is all about stability, laying foundation down below his bandmates as they spread far and wide; guitarist Tom Juhas brings an edge to this music and he pairs well with violinist Aleksandar Gajic, an intriguing player who builds distinctive melodic lines with Hebraic underpinnings; drummer Joshua Van Tassel is often right there with Higgins, playing straight rock beats behind the band, but he also knows how to pull back and work with tom-based minimalism when Higgins is looking to create something more open; and keyboardist Robbie Grunwald is a utility man, embroidering the music with unique sounds, tempering extreme thoughts from other band members, and providing colorful solo work.

It's no surprise that a project like this should end up on John Zorn's Tzadik imprint. Bret Higgins' Atlas Revolt is a boundary-pushing jazz-rock-klezmer hybrid that should fit right in on that label.