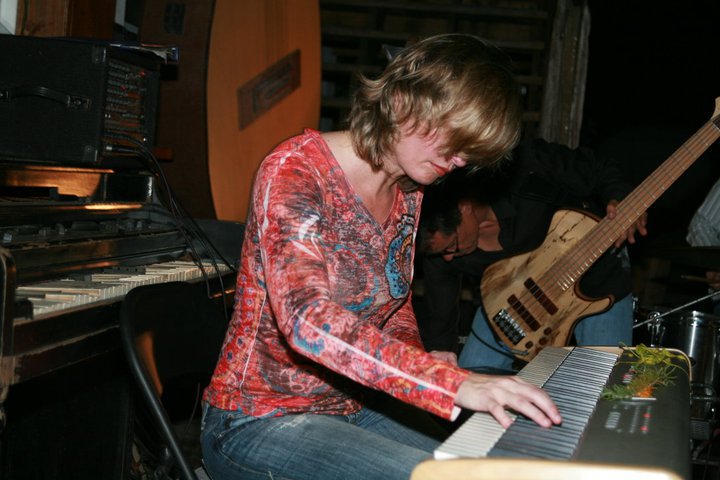 The fact that Brenda Hopkins Miranda is one of the most exciting pianists in Puerto Rico certainly added to the allure and excitement in this packed seaside venue. The Bodega Andreu Solé is an open air Spanish winery located on a small bay in Guanica, Puerto Rico. Under the spell of a full moon, this would prove to be the perfect setting to take in Hopkins and her troupe as her music is saturated with both Caribbean and Iberian influences.

Opening the evening's performance with "Miranda," and going right into "El Regreso/The Return," and "Plaza Nueva," (all from her release Recuerdos de Granada,) there was a resonating flamenco flavor as she set up the ambiance for musical images which progressed as the show continued. She also presented several new tracks from her forthcoming album. The songs "Corozaleando," and "Cuesta de San Gregorio," were a special treat to hear for the first time. Hopkins' compositions are very intense and passionate which are personified by her piano style, for she embodies the music. She is a mesmerizing performer with an absolute command over the production which envelopes her accompanists as well.

The musicians with Hopkins for the evening, bassist Samuel Morales, drummer Vladimir Coronel, and percussionist Guillermo "Memo" Barron, who excels on the djembe and cajon, are her regular band for this "Piano Gitano" tour. They were all in sync with the flow of the music, and also contributed their personal touches at just the right places to liven up the pieces with spontaneity and improvisation.

Just when the audience seemed to grow complacent, the pace quickened with "Vimaambi," "Flamenco Borincano" (both from the record) and a new composition, "Tangos de Albaicin" which were enhanced by the introduction of a flamenco dancer to dramatize the songs. The young lady, Vali Val, added the perfect visualization for which this music is associated. The two years Hopkins spent in Granada, Spain as pianist for a flamenco dance show is evident in not only her music, but in the choreography with all its authentic flair and sizzle. This proved to be the highlight of the evening as the yells of "Olé" rang out.

After a brief intermission the band returned with "Chawarma," a strong piano number, where Hopkins stretched out and displayed her amazing jazz chops. This was followed by "Huerto de Juan Rana," with its extended pensive intro leading into a spiraling crescendo. Having performed most of the songs on her album, which a lot of the audience was familiar with, by the end of the nights performance Hopkins had proven that she could deliver the goods in a live setting and keep the audience captivated while doing it. The coupling of her tremendous talent with perfect rhythmic accompaniment, which is essential to a Puerto Rican artist playing on home turf, won her an affectionate response and ovation for her efforts.

Though Brenda Hopkins Miranda can easily draw a crowd in the capital city of San Juan, it was quite impressive to see such enthusiasm at this rural location, which proved to be the ideal spot for this performance. I for one had hoped to see her in such an intimate place, as this is not theater, sit in your seat, type of a show. And most everyone present had a reasonable knowledge of what the music was about and what to expect. We were not disappointed.