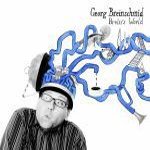 Austrian bassist/composer Georg Breinschmid is a rare phenomenon who continues to amaze, not simply with his outstanding virtuosity, but with his acute sense of American blues and jazz music. If that sounds like an unlikely mouthful, it is, because the facts far outweigh the fantasy. He has sat in with Archie Shepp, the late Charlie Mariano, Kenny Drew, Jr., Biréli Lagrène, the Vienna Art Orchestra, and many others, when he turned his back on his regular gig with the Vienna Symphony Orchestra, to concentrate on contemporary music. The words "prodigious" and "ingenious" are not used loosely in describing Brein's World, a double album that exemplifies both words with a stylistic grace that is quite unmatched by many.

Breinschmid performs with unsurpassed expression, never accenting the predictable. His playing in bebop mode on "Blues Five" is only matched by his freer rhythmic excursions on "Without Me." His grasp of stately rhythms of the Valse and the Tango is legion. He plays with a gentle undulating tone, conjuring up an ocean of sound that laps at the melody and harmony. His solos are volatile in the upper register and full of grace in the lower, but it is highly unlikely that he would inhabit any one exclusively throughout the excursion. He phrases straight as an arrow, then inside out; always melodic and resonant. He seems addicted to odd meters and plays them with aplomb, as in "7/8 Landler." Moreover, Breinschmid is joined by a slew of musicians who seem as unknown as they are ingeniously matched, many of with whom the bassist has performed in past ensembles.

There is no real delineation between the material; there are gems on both discs. His vocal account of a particularly vexing encounter with technology in "Computer-Weinerlied" is hilarious, spectacularly narrated and full of genuine pathos. The version of Franz Liszt's "Leibestraum" is a brilliant journey into the one of that composer's most famous pieces, played with majesty, grace and the tortured sighs that come in waves as the piece progresses. Breinschmid's grasp of the polka, marches and the classic Austrian musical form, the Valse, is spectacular, which is brought to a peak in the performance of "Trompetenpolka/Radetzkymarsch" and "Petite Valse." The bassist also shows an outstanding grasp of the classic song form including the Latin bolero.

This is probably the first Georg Breinschmid' album to reach the US, and it would be an artistic crime of sorts if more music by this ingenious musician does not follow in the near future.