By EDWARD BLANCO
December 15, 2011
Sign in to view read count 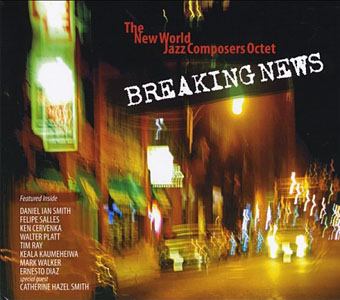 Eight players does not a big band make, but The New World Jazz Composers Octet is a light ensemble offering an assertive sound reminiscent of a big band production. Boasting a cadre of educators and first-rate musicians, the group manages powerful orchestrations employing an exciting horn section, lively percussion and blistering piano work from Tim Ray in its aggressive approach to the music. Breaking News is the Octet's third album, revealing a program of charging hard bop featuring nine compositions from members of Boston's Berklee College of Music such as Ted Pease, Matthew Nicholl and Richard Lowell. Trumpeter Walter Platt and saxophonist Felipe Salles, both members of the Octet, also contribute one new composition each to the selection.

Saxophonist and Berklee College professor Daniel Ian Smith founded the group in 2000 "in the spirit of the Mingus Jazz Workshop," specifically as a musical forum in which to feature works by Berklee jazz composers and other writers in the Boston area. The group opens up with two Nicholl compositions, the up-tempo sizzler "Poco Picasso" and the gorgeous ballad of "Wishful Thinking," featuring Salles on tenor, Platt's tasteful trumpet, pristine work from Ray, and a drum solo from Mark Walker.

Platt's title piece, a minor blues similar in texture to the hard bop styles of the past, includes more of the trumpeter's phrasings, as well as a hot Smith solo on baritone saxophone. Strong solo work from trumpeter Ken Cervenka and a lively tenor sax chase between Smith and Salles highlight Lowell's "Warp 7, Now!" as the group engages warp drive. The centerpiece of the album is Pease's "Trilogy" suite, dedicated to three of his favorite composers: the swinging "Thad's Pad," a tribute to Thad Jones; the melancholy "Strays," dedicated to Billy Strayhorn; and, ending with a bang and not a whimper, the burning tribute to Bill Holman, "Willis," complete with an array of solos from various members of the band.

With all the political, economic and social news making the front pages of the media each day, it's refreshing to hear some Breaking News that's truly pleasant for a change. Daniel Ian Smith's New World Jazz Composers Octet is a critically acclaimed, world-class ensemble, lending a bit of swing and swagger to new and innovative charts that, if not for this group, would never be heard.