The Pretenders: Break Up The Concrete

By MIKE PERCIACCANTE
December 23, 2008
Sign in to view read count 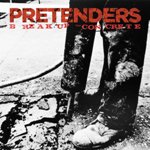 At first look, with the exception of Chrissie Hynde, The Pretenders circa 2008 bears little resemblance to the band that blasted its way onto the musical landscape with "Brass In Pocket" and "Mystery Achievement" in 1980. Besides Hynde, only one other original Pretender is still alive—drummer Martin Chambers, and he doesn't even play on this CD. Even though he's still part of the band, he didn't record on the new release because Hynde was looking for a slightly different sound, so Jim Keltner mans the skins on Break Up the Concrete, though Chambers is still touring with the group.

Hynde and The Pretenders never went away, but their recent efforts were a bit lackluster. Packed! (Sire, 1990), Last of the Independents (Sire, 1994), Viva el Amor! (Warner Bros, 1999) and Loose Screw (Artemis, 2002) were uneven and occasionally listless affairs. Conversely, every track on this comeback is a winner. The disc, with its rootsy Americana, alt-country and rockabilly rhythms, ventures away (although only a bit) from the Pretenders' tried-and-true formula.

The CD is highlighted by the classic Pretenders bluster and the frantic pace of the disc's opener "Boots of Chinese Plastic"; the Bo Diddley-influenced title track; the boogying blues rocker "Rosalee"; and weepy pedal steel-driven "One Thing Never Changed," on which Hynde proves that she is an able crooner.

Also of note are "Don't Cut Your Hair," the poppy "Almost Perfect," the tender "You Didn't Have To" and "Love's a Mystery," which sounds somewhat like recent-vintage Elvis Costello.

The music and performances on this disc come closest to the early Pretenders sound last heard on Learning to Crawl (Sire, 1984). The songs are all about attitude, with strong melody and even stronger lyrics. The difference between Hynde and The Pretenders then and now encompasses more than the personnel changes. The 2008 model is predicated on the fact that almost thirty years down the road, much has happened. Hynde has grown and grown-up. She's seen a lot. She wrote ten of the album's eleven songs which delve into politics (on a more mature level than in the past), relationships (from an "older" perspective—that of a 57-year-old, not that of a late-twenties rebel) and some sadness about what might have been.

Break Up The Concrete is classic Chrissie Hynde. She's still the coolest woman in rock and can still rock 'n' roll with the best of them. She can still spit out some of the most viscous, sarcastic, swaggering lyrics followed almost immediately by a soft sexy purr in the space of a single three minute song. The music is still good and still relevant. Without a doubt, Chrissie Hynde still has it and knows how to use it.

Boots of Chinese Plastic; The Nothing Maker; Don't Lose Faith in Me; Don't Cut Your Hair; Love's a Mystery; The Last Ride; Almost Perfect; You Didn't Have To; Rosalee; Break Up the Concrete; One Thing Never Changed.