By WILLIAM GRIM
November 3, 2002
Sign in to view read count 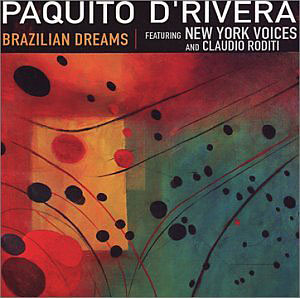 This excellent cd is a recording of a live performance at Manchester Craftsmen's Guild in Pittsburgh. Fans of the New York Voices will probably already be familiar with the live performance recording at the same venue from several years earlier that featured the Voices along with the Count Basie Orchestra. The collaboration among Cuban reed virtuoso Paquito D'Rivera, the Brazilian master trumpeter Claudio Roditi and the Voices is a match made in heaven. This album is particularly noteworthy because D'Rivera is featured mostly on clarinet. Although not released in the United States, the Voices were featured on Astrud Gilberto's cd Temperance, so one has been anticipating for some time an album of theirs entirely devoted to bossa nova.

The album features compositions by Jobim, Bonfa, Donato as well as originals by D'Rivera and Roditi. The arrangement of "Corcovado" that starts off the cd is especially nice, and the Voices provide a vocal texture that is indebted both to the great Brazilian vocal groups such as Quarteto em Cy and MPB-4 as well as the Swingle Singers. "One for Tom," an original of D'Rivera's (based in part on Jobim's "Se todos fossem iguas a voce") showcases a tenor sax solo by Darmon Meader of the Voices, who is as fine an instrumentalist as he is a singer.

Peter Eldridge of the Voices(who is one of the great jazz vocal pedagogues of recent years, numbering Jane Monheit among his students) gives a finely nuanced interpretation of "Gentle Rain."

Highlights of the cd include "Desafinado" and "Retrato em branco e preto," the latter sung in Portuguese. The instrumental versions of Joao Donato's ever popular "A Ra" ("The Frog") and Roditi's original "Red on Red" round out a very satisfying album. Given the extraordinary wealth of Brazilian music it is hoped that D'Rivera, Roditi, the New York Voices and company will see fit to deliver up another another serving of bossa nova in the near future.