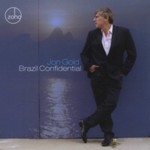 Jon Gold's Brazil Confidential is unique. It is an album of music that shows just how much the pianist and composer has internalized the Brazilian experience and what that can do for authenticity when it comes to an American musician writing in a Brazilian style. It may be true that the experience is largely urban, but that should not take away from the achievement of this album. Perhaps the true breakthrough is in the unabashed spirituality that is fused into the urbane and the profane. Nowhere is this more beautifully executed than in "Teresinha," a wonderful rhythmic extravaganza written in a partido-alto form. Beautiful, shadowy figures emerge as the song tumbles out of its cocoon spun out of a berimbau. This melding together of a constant, fluttering mysticism and a rollicking, down-to-earth rambling shuffle pervades throughout the album.

Gold has assembled a fine cast of musicians, the bedrock of who are percussionist Zé Mauricio, drummer Mauricio Zottarelli, guitarist Scott Anderson, and bassist Harvie S. The percussionist has a bewitching effect on the band with his effervescent style and is clearly the star of "Funky Jabour," a wonderful tribute to the great Hermeto Pascoal. The song aims to mimic the musical awakening that takes place in the Pascoal studio, when The Sorcerer (as Pascoal is often called) gathers his musicians to rehearse each morning. But only here it is Zé Mauricio around whom this "rehearsal" pivots with delightful contrapuntal interplay and a lively and soaring exchange between Andrew Sterman on flute, Bryan Murray on tenor saxophone, and Anat Cohen on soprano saxophone. This trio returns again on "Vitamin B" a striking and complex melody with a wickedly shifting and alternating beat within the samba structure, only this time the playing is in unison.

The maestro and pianist shows himself to be expert in various ethnic forms as well. "Confissão" is a masterful ballad with a deeply soulful vocal by Tatiana Parra, whose voice is singular, sensuous, and lithe as she renders this memorable song, causing the heart to bleed with sadness. "Singela" is a fine song that mimics the choro with a superb interplay between Katie Scheele on English horn and the piano of Gold shadowing her as she catches an undulating wave of sound. The tone textures that emerge are altogether wondrous.

The guitarist on the date appears to be the composer's alter ego on "Vitamin B" and elsewhere too. Anderson has even picked up a Brazilian moniker in the affectionate "Scottinho" and shows why. His guitar playing is wistful and could very well be part of the fabric of Ipanema or even the barrio of Jabour, for instance. The exactitude of his playing as he catches the waves of sound on "Paraty" is quite simply marvelous. The song, "Rapadura," with its resplendent maracatu rhythm in its coda is another exquisite example of Gold's Brazilian experience and recall, albeit obliquely, another legend, Luiz Gonzaga on this landmark album from the truly talented Jon Gold.