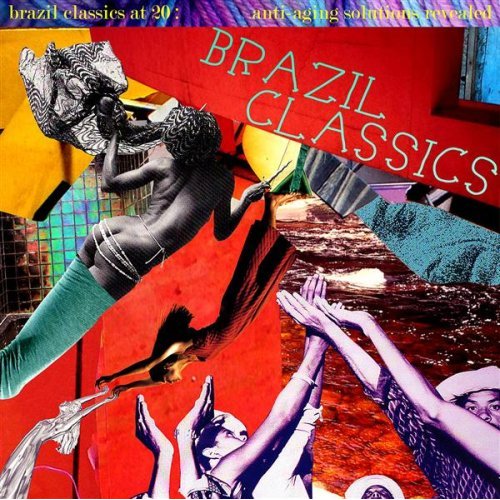 Ben's "Ponta De Lanca Africano (Umbabarauma)" launches the choice selections with some heavy Brazilian funk and a rock n' roll edge. Prime breakbeats full of resounding handclaps and lush percussion back a catchy, call-and-response chorus between the frontman and his female back-up singers; the results of a Brazilian importing his love of James Brown grooves and vintage Rolling Stones swagger.

Several tunes coat their hybrid sensibility with a pop sheen, such as the upbeat tracks contributed by singers Gil and Marisa Monte. Likewise, Lenine's "Hoje Eu Quero Sair Só" brings a modern production style and singer-songwriter vibe that may appeal to those who dig Ben Harper or Dave Matthews, marrying acoustic guitar with a hip-hop beat and wah-wah effects in a bluesy, mid-tempo bounce.

Gonzaga's "O Fole Roncou" stands out as the compilation's only forró contribution, a countrified two-step that bursts out with a driving electric guitar riff. Accompanied by accordion, the polka-influenced style features the unique percussion tandem of metal triangle and bass drum.

Some of the most arresting jams include those from artists who employ a classic, defining samba feel, with acoustic native instruments including the small cavaquinho guitar, the tambourine-like pandeiro and the ear-catching cuica drum, which produces pitch-bending effects that are eerily vocal-like. Agepê's "Ela Não Gosta De Mim" drops a velvety mix of the above with crisp accents and a chorus of chanted vocals to cushion the pelvis-shaking rhythm. The same kind of sweet, mid-tempo sway is heard in "Sonho Meu," the vocal duo of divas Maria Bethânia and Gal Gosta ringing out in rich, bell-like tones with a lilting quality derived from the Portuguese fado tradition. The haunting melodic hook of Martinho Da Silva's "Claustrofobia" shares that quality as well, its aura both fresh and timeless.

Hardcore fans will want to know that, in addition to a limited-edition vinyl version, this compilation features a slightly different set of tracks available on the downloaded version. Either way—with beguiling beats and melodies—Brazil Classics at 20: Anti-Aging Solutions Revealed may not keep the wrinkles off your face, but the buoyant sounds will certainly put a swing in your step and a shake in your rump.