By GREG CAMPHIRE
February 9, 2008
Sign in to view read count 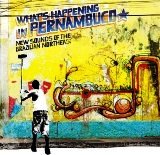 Exemplifying a true melting pot aesthetic, Brazilian music has always been comprised of diverse ingredients. From the first Portuguese settlers and their African slaves mixing it up with the Native Americans, through the continual influx of immigrants from around the world, Brazil's musicians have always been adept at expressing omnivorous tastes and integrating every flavor of spice they've encountered. Documenting the turn of the 21st century, Luaka Bop's What's Happening in Pernambuco: New Sounds of the Brazilian Northeast, brings adventurous palettes up to date with a sampling of dishes from just one of the country's regions.

This compilation can be heard as somewhat of a sequel to the excellent Tropicália: A Brazilian Revolution in Sound (Soul Jazz, 2006), which focused on 1960s music that incorporated rock n' roll, experimental song structures and politically-charged attitudes. Fast forward to the mid-1990s, when hip-hop was hitting the ghettos of the Pernambucan capital, Recife; giving birth to the Mangue Beat scene. This movement, led by innovators Chico Science and Fred Zero-Four, intensified hybrid forms by splintering traditional rhythms like maracatu, coco and ciranda, juxtaposing them with punk, hip-hop and electronica.

Collage is the key approach among the artists on Pernambuco, with imaginative uses of cut-and-paste methods. Mombojó's tune "Cabidela combines live hip-hop drums and turntable scratches with a bossa-infused flute breakdown and vocals that float with melancholic, behind-the-beat phrasing. Cidadão Instigado's "O Pobre dos Dentes de Ouro bends genres by slyly shifting a wistful melody from the acoustic tinge of Portugal's fado song form into a mélange of spacey samples, pitch-shifted vocals and acid rock guitar over a funky loop.

However, other songs simply reintroduce traditional styles for a new generation. Tiné evokes the sound of a "Cobrinha ("Cobra ) with the slithery pulse of his words and just the sparse ensemble of acoustic guitar, violin, maracas and the tambourine-like pandeiro. Similarly, Siba takes a rustic roots approach to create "Vale do Jucà, where maracas cushion a spindly acoustic guitar and a lilting melody of whistling and wordless vocals. And even though "Instante Feliz, by the duo Vates e Violas, keeps it conventional with an accordion-fueled, rural arrasta-pé rhythm, the polka-sounding style is itself likely derived from early Dutch and/or German influences—and thus a multicultural pastiche in the first place.

This whole mash-up of intriguing sounds would sound bizarre if it wasn't all so catchy, sexy and fun. To tweak your eardrums with a new-school approach to musical globalization, give a listen to What's Happening in Pernambuco.

Visit What's Happening in Pernambuco on the web.

Pode Me Chamar; Vale Do Juc